SpaceX is set to launch its 15th Falcon 9 of the year, lofting another batch of 53 Starlink satellites on the Starlink Group 4-14 mission. Liftoff is currently scheduled to occur on April 21 at 11:14 am EDT (15:14 UTC) from Space Launch Complex 40 (SLC-40) at Cape Canaveral Space Force Station (CCSFS) in Florida.

As is traditional these days, the Falcon 9 for this mission will feature a flight-proven booster, B1060. This booster is flying for the 12th time, being the second one in the fleet to achieve that – and just one month after B1051 became the first one to reach 12 flights.

For this mission, SpaceX will follow from the previous Starlink mission, Starlink Group 4-12, and launch to the northeast with the booster landing on SpaceX’s Autonomous Spaceport Drone Ship (ASDS) Just Read The Instructions. The ship will be located approximately 630km downrange in the north Atlantic Ocean.

SpaceX rarely announces ahead of time whether the fairing halves for a mission are being reused or not, but following their separation from the second stage, they will parachute down to land on the North Atlantic Ocean and be recovered by SpaceX’s multi-purpose vessel Bob.

The rocket was transported from Hangar X at Roberts Road to LC-40 on April 18, with rocket and payload integration S occurring over the next few days inside the launch site’s Horizontal Integration Facility (HIF). Rollout occurred late in the evening on April 20, with the rocket going vertical early morning on the 21st.

Launch pad teams readied the vehicle for launch up until approximately T-4 hours when the pad was cleared of personnel. Operators at SpaceX’s Launch and Landing Control Center at CCSFS then powered up the rocket and checked its systems, with some helium loading occurring a few hours prior to propellant load.

The launch director will open a telematic go/no-go poll for operators to indicate the status of the rocket, launchpad, and range systems in order to proceed with the launch autosequence and propellant loading. That decision will be then relayed by the launch director five to eight minutes later over on the countdown nets.

At T-35 minutes, the launch autosequence will begin and the ground computers will start the carefully choreographed and automated propellant load sequence that begins with RP-1 (rocket grade kerosene) load on both stages and liquid oxygen (LOX) load on the first stage.

At T-22 minutes, RP-1 loading will be complete in the second stage. Lines on the strongback of Falcon 9’s Transporter/Erector (T/E) will then be purged ahead of LOX load on the second stage, which will occur at T-16 minutes.

Falcon 9 rolls out to SLC-40 ahead of the first GPS-III mission in 2018. Credit: SpaceX/US Air Force

At T-7 minutes, the nine Merlin engines on the first stage will begin the chilldown sequence. This is when a small amount of LOX is flowed through the engine turbopumps to ensure no spontaneous vaporization occurs once they start high LOX flow during ignition.

At T-6 minutes, RP-1 loading will be complete on the first stage. Shortly afterward, the tanks will pressurize for strongback retraction which should occur at T-4 minutes and 30 seconds.

At T-3 minutes and T-2 minutes, the LOX load will be complete on the first and second stage respectively. At this point, the rocket will be fully loaded with propellants and the ground gas closeouts will start.

At T-1 minute, the rocket will start-up, taking over command of the automated launch countdown sequence. Just a few seconds later, the launch director will give the go or no-go decision to proceed with the count.

From T-10 seconds onward, all abort scenarios are automatically controlled by the rocket’s computers – which will command engine ignition at T-3 seconds.

At T-2.8 seconds, the engines will start, ramping up to full thrust in two seconds. The computers will verify engine health while the ground systems keep the rocket held down to the ground. Once cleared for liftoff, the ground hold-down clamps will release the rocket at T0.

Approximately 40 seconds into flight, the nine Merlin engines on the first stage will throttle down in preparation for the period of maximum aerodynamic pressure, or Max Q. After passing through Max Q, the engines will throttle back up. 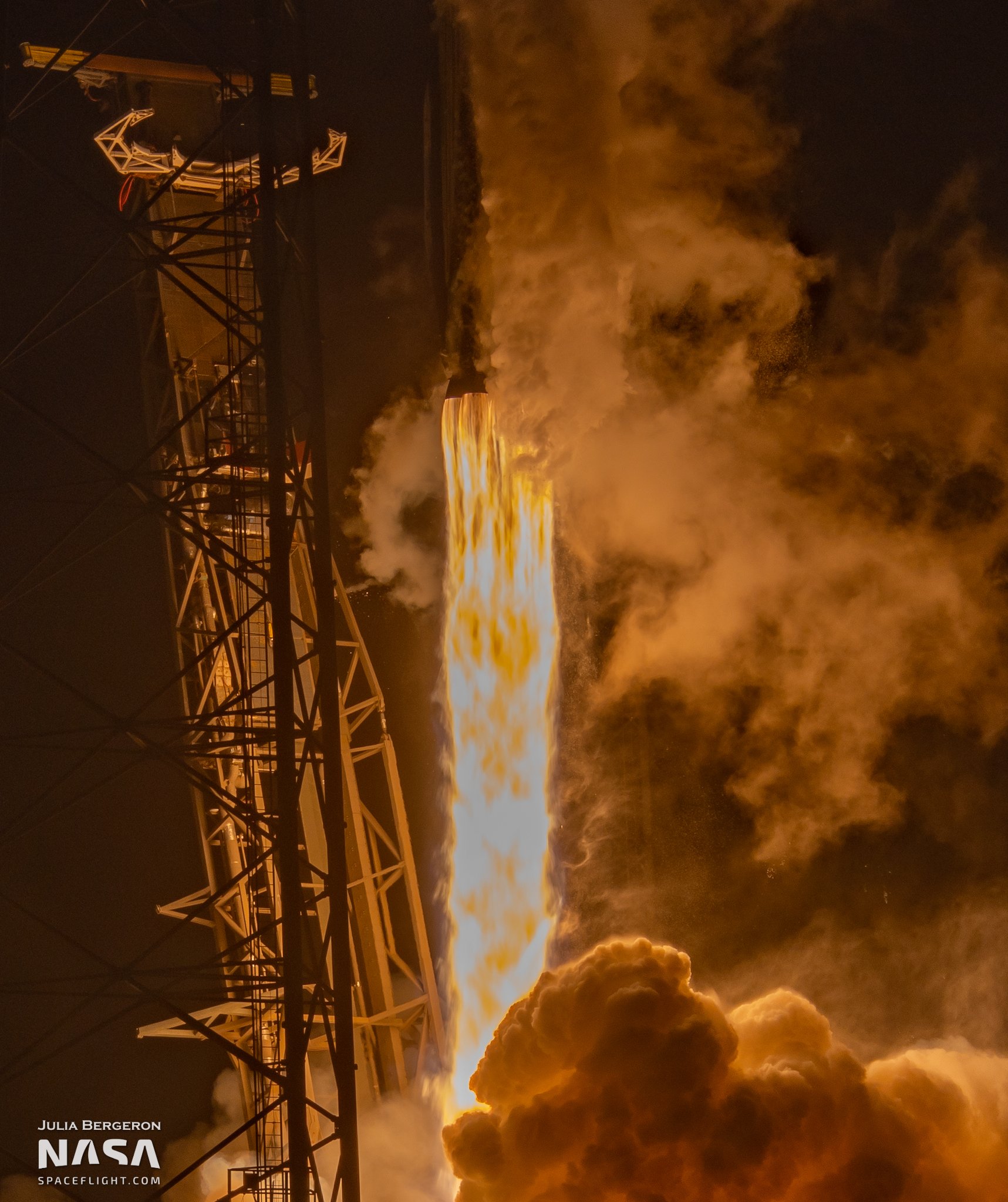 Falcon 9 seconds after lifting off on a previous mission. (Credit: Julia Bergeron for NSF)

At T+2 minutes and 32 seconds, the nine main engines on the first stage will shut down in a sequence of pairs in an event referred to as Main Engine Cut-Off, or MECO. Stage separation will follow about three seconds later, and the MVac engine on the second stage will ignite around five seconds later to push the 53 Starlink satellites into low Earth orbit. Ten seconds after ignition, the fairing halves will separate from the rocket and begin preparations for the reentry and recovery sequence.

Meanwhile, the first stage will deploy its four aerodynamic titanium grid fins and use cold gas nitrogen-based thrusters to orient in an engines-first attitude for reentry.

The booster’s 20-second long entry burn should occur at around T+6 minutes and 20 seconds. During entry burn, the first stage ignites first its center engine, E9, to reduce the sloshing and properly settle the kerosene on the tank. After a couple of seconds, the stage then ignites another two engines, E1 and E5, to rapidly decelerate. Entry burn shutdown then follows in the opposite order, with shutdown of the E1 and E5 engines first and then E9 a few seconds later.

At T+8 minutes and 10 seconds, the center engine will ignite one last time for landing burn. If this booster lands successfully, it will be the 41st successful landing in a row since B1059 was lost in February 2021 during the Starlink v1.0-19 mission. 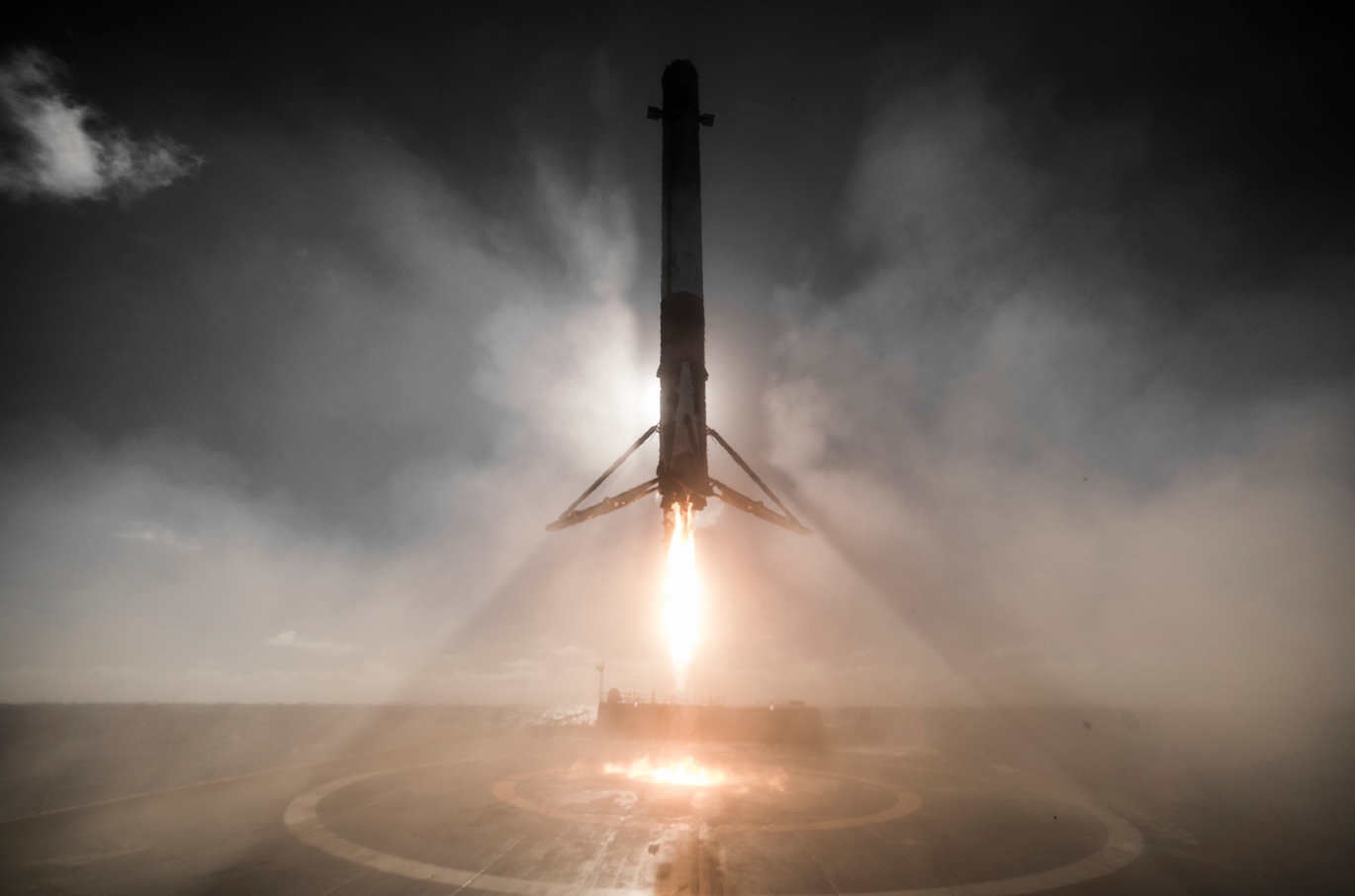 A Falcon 9 first stage in the final second of its descent to a landing on the drone ship. (Credit: SpaceX)

Once in the 304 x 318km orbit inclined 53.2º, the second stage will initiate an end-over-end rotation that creates the inertia needed for the Starlink satellites to separate from the stack.

These satellites are headed for the fourth shell of Starlink’s first-generation constellation, bringing the total number of satellites launched to 2,388. Of those, 238 satellites have already reentered and only 1,683 satellites are currently at their operational orbit.

This launch follows the rapid cadence of launches that SpaceX is keeping ever since the launch of the Crew-3 mission back on November 11, 2021. In the 23 since that mission, SpaceX has launched 22 times, closely averaging their target of one launch per week. This cadence would in theory allow them to launch around 50 times a year.

However, more recently, Elon has made comments on Twitter about efforts to bring that cadence up to at least 60 launches this year, and perhaps even beyond that.

Public information about SpaceX’s launch manifest for this year points to about 35 customer launches in the books. At least eight Starlink missions – nine after this one launches – have already occurred this year, with confirmation of up to five more coming up in the next month or two.

This increased cadence will be helped by SpaceX’s refinements of launch preparations. Most of the first stage and second stage integration work is now being performed several days or weeks before flight at their expanded Hangar X facility at Roberts Road. This allows the teams to roll out the whole rocket – minus payload fairing – all the way to the pad much closer to launch day.

That recent expansion at Hangar X will likely be used to facilitate fairing refurbishment and reuse. Fairing reuse has helped ramp up the launch cadence as SpaceX can use the same fairing halves many times instead of waiting to produce new ones.

Booster reuse and production will also be key to achieving this goal. This mission’s booster, B1060, is the second to reach 12 flights with a third one expected to join a few weeks from now. New boosters are also being introduced into the fleet to help that cadence, with booster B1073 expected to debut next month on a Starlink mission.

Improvements on processing after landing also help achieve this with both east coast droneships seemingly able to achieve a turnaround of 10 to 12 days based on their port activity. This is also a sign that the ships don’t need as much maintenance between landings as they are used to.

Lastly, over the past few months, we’ve also seen SpaceX’s attempt to perform launches very close to one another, with one of those attempts looking at just 1-hour 34-minutes between launches in February with NROL-87 and Starlink Group 4-7.

This is also a testament to the Eastern Range’s support to drive an increased cadence from Cape Canaveral, as they are the entity that coordinates and approves launches from CCSFS and the adjacent Kennedy Space Center.

Sixty launches this year would mean SpaceX needs to average five launches per month and, while their current pace is remarkable, it is struggling to achieve that target. Only once in their history has SpaceX been able to launch five times in a month, occurring in December 2021.

This month, there are a total of five scheduled launches – three of them have already occurred, with this one being the fourth. SpaceX’s next launch, Crew-4, is set for April 26 following the return of the Axiom-1 crew from the International Space Station. After that, another Starlink launch from SLC-40 is expected in early May.

(Lead image: A Falcon 9 at SLC-40 ahead of a previous Starlink mission. Credit: SpaceX)