The Russian federal space agency, Roscosmos, is set to launch three people to the International Space Station (ISS) from Site 31/6 at the Baikonur Cosmodrome in Kazakhstan. Liftoff is scheduled for 13:54:49 UTC on Wednesday, Sept. 21.

The launch marks a resumption of US astronaut flights onboard Russian rockets and is the first of up to three crew swap exchanges between NASA and Roscosmos.

As originally envisioned, Soyuz MS-22 was planned to launch on Sept. 13, 2022, with a crew of three Russian cosmonauts including Sergey Prokopyev, Dmitry Petelin, and Anna Kikina.

This would have continued a year and a half long string of missions in which no US astronaut launched on Russian crew flights.

This is not the ideal rotation process, as having an American on each Soyuz mission and a Russian on each US mission ensures that an American and a Russian are always on the ISS even if one of the crew vehicles had to return early for a medical emergency with a crewmember or a systems issue.

It was the intention at the outset of the Commercial Crew Program to have this kind of crew swap now beginning with this mission; However, Russia initially declined to fly crew on Dragon (offering no proof to their claims of safety issues) before the Russian government invaded Ukraine, which complicated international relations further.

In July, the two agencies announced they were close to finalizing the crew swap agreement, which eventually formalized plans for Anna Kikina to move from Soyuz MS-22 over to the SpaceX Crew-5 mission while NASA’s Frank Rubio would fly on Soyuz MS-22 .

With this agreement, cosmonaut Kikina will become the first Russian to fly on US spacecraft since Sergei Treshchov landed on the shuttle Endeavor at the end of the STS-113 mission in December 2002.

Up to two more Russian and American crew swaps between Soyuz and SpaceX’s Crew Dragon are possible under the current agreement in 2023 and 2024.

The crewed Soyuz spacecraft flying the mission is part of the MS series and carries a serial number of 751. It received the name Tsiolkovsky after the Russian scientist and inventor Konstantin Tsiolkovsky. Soyuz capsules are rarely named, with only four past examples going back to 2011 offered by Roscosmos, yet this seems to be a trend of late. 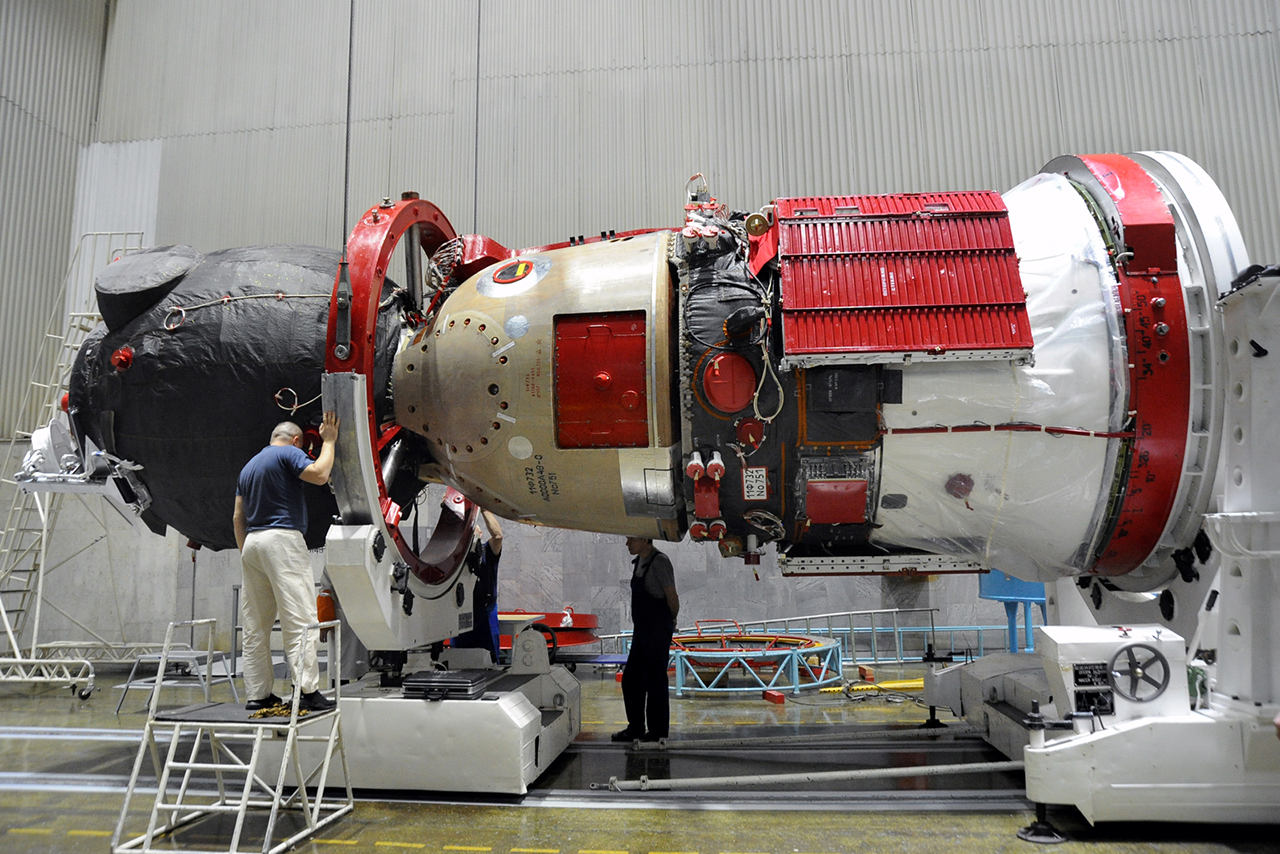 Soyuz left its production facility at SP Korolev Rocket and Space Corporation Energia on Dec. 7, 2021, for shipment to the Baikonur Cosmodrome and arrived seven days later.

All work at Baikonur on the Soyuz 2.1a rocket stopped from June 14 to July 17 due to a lack of Soyuz operations given sanctions against Russia.

In mid-July, the Soyuz MS-22 spacecraft was taken out of storage for final pre-launch preparations, which included full power-up and systems tests as well as deploying and monitoring the solar energy production capability of the solar arrays.

A flight readiness review was held on Sept. 1, clearing the crew as well as the rocket and spacecraft for the final elements of preflight preparations.

Both the prime and backup crews arrived at the launch site on Sept. 5 and performed their final fit checks inside the Soyuz MS-22 capsule on Sept. 7. 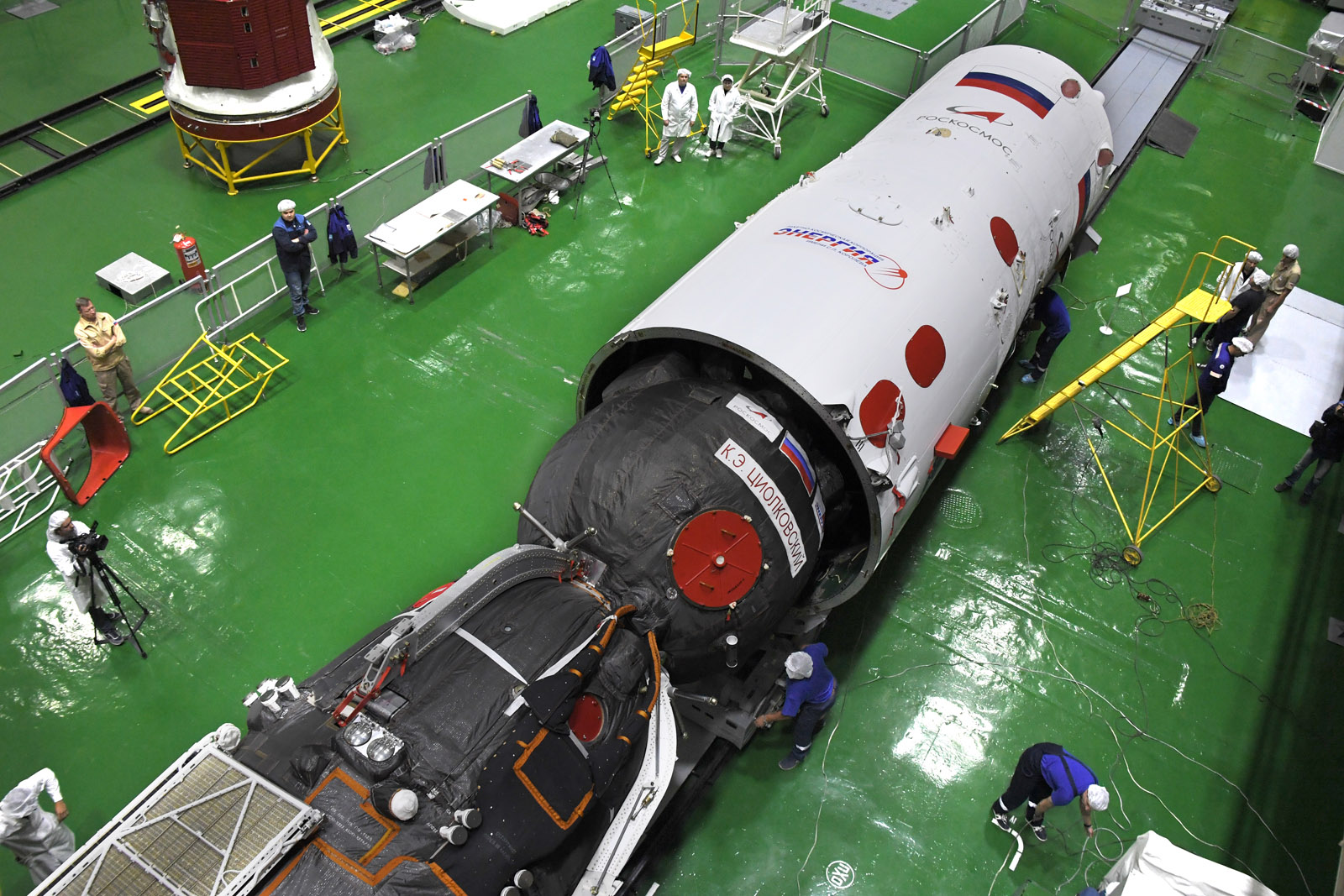 Soyuz MS-22 is encapsulated within the Soyuz-2.1a fairing. (Credit: Energia)

The Soyuz spacecraft was fueled on Sept. 8 and then loaded with provisions and science experiments before being placed inside its payload fairing, which contains the launch abort system. The fairing serial number of this flight is M15000-098.

The Soyuz spacecraft was transported by train on Sept. 15 to its final integration building where the waiting lower stages of the Soyuz 2.1a rocket were located.

With the integration complete, final checks of the overall missile were made before the entire assembly was taken to Site 31/6 on Sept. 18. 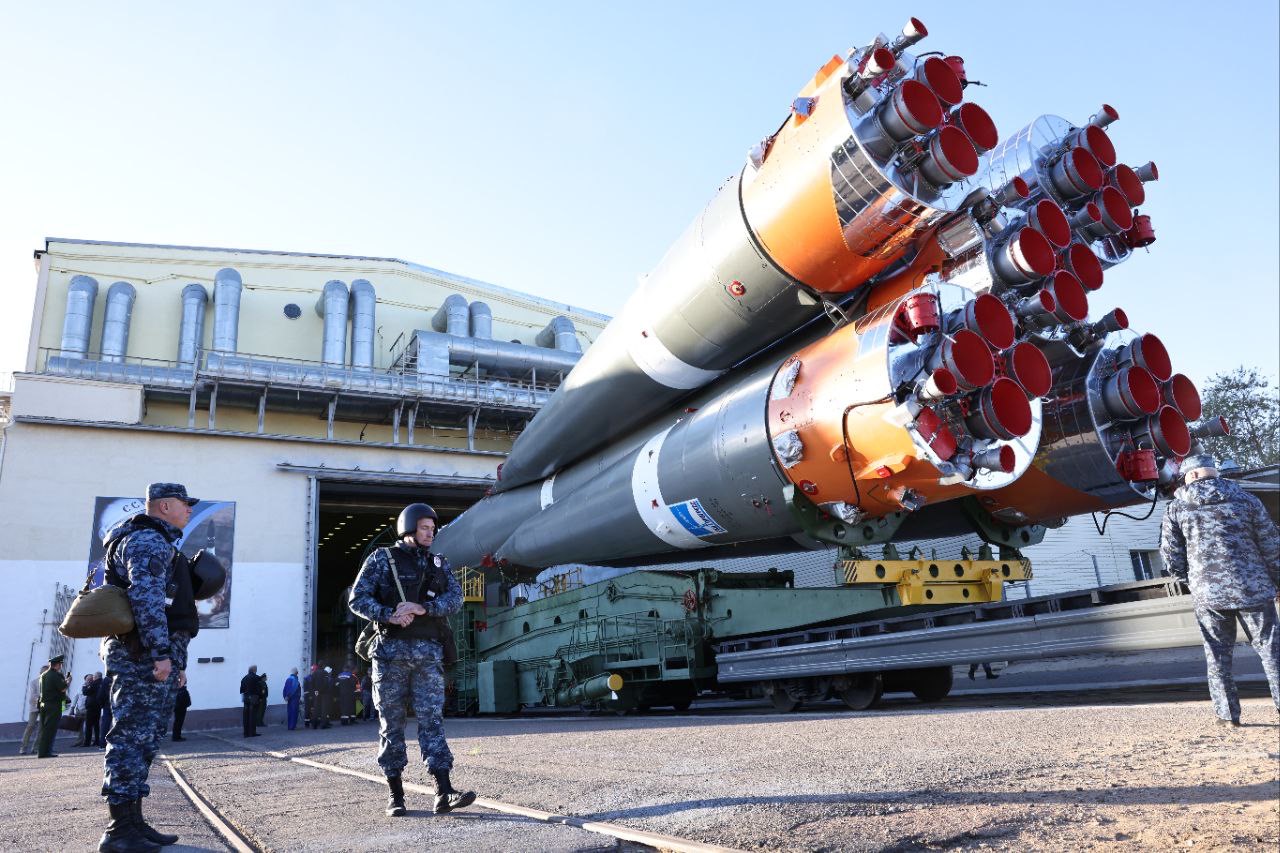 Soyuz is rolled out to Site 31/6 at Baikonur. (Credit: Roscosmos)

The Soyuz rocket has a serial number of C15000-051, and the call sign for the mission is “Altai,” meaning “Gold Mountain” after the mountain range in central and east Asia where Russia, China, Mongolia, and Kazakhstan meet.

At liftoff, the Soyuz rocket will use its four boosters, core stage, and upper stage to insert the Soyuz MS-22 vehicle into an approximately 200 km circular orbit for a two-orbit, three-hour fast track rendezvous with the ISS. Docking is expected at 17:11 UTC.

Born on Feb. 19, 1975, in Sverdlovsk, Russia, Prokopyev entered the Tambov Higher Military Pilot School where he specialized in Command Tactical Aviation and Air Movement Control and qualified as a pilot engineer.

In 2007, he took a two-year position flying Tu-22M3s as Commander of the air detachment of the 52nd Heavy Bomber Aviation Regiment. 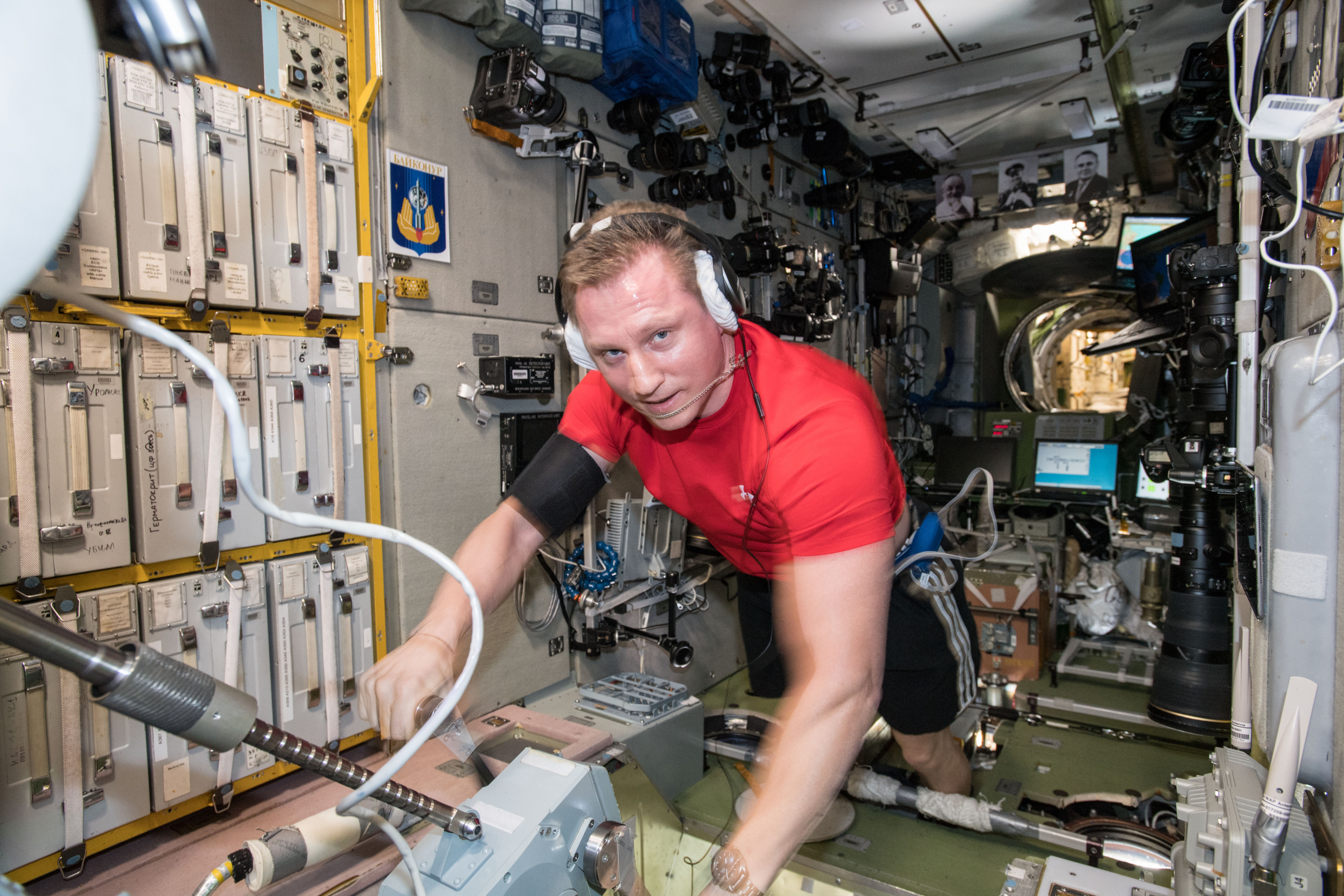 Sergei Prokopyev on board the ISS in November 2018. (Credit: NASA)

Beginning in 2010, he served as Commander of an aviation group of strategic bombers flying Tu-160s with the 121st Heavy Bomber Aviation Regiment. Later that same year, he was recommended as a cosmonaut candidate and was officially selected on Oct. 12, 2010.

Prokopyev passed the state examination on Aug. 3, 2012, and was officially selected as a test cosmonaut for Roscosmos, whereupon the Russian Ministry of Defense formerly dismissed him from the armed services.

During his first space flight, Prokopyev amassed 196 days, 17 hours, and 50 minutes in space, a flight that was notable for the discovery of a hole in the Orbital Module of the Soyuz during the docked portion of the mission.

Soyuz MS-22 will be his second spaceflight.

Making his first trip to space is Dmitry Petelin.

Born on July 10, 1983, in Kazakh USSR, now Kazakhstan, Petelin graduated from the South Ural State University in 2006 with degrees in aircraft and helicopter engineering. 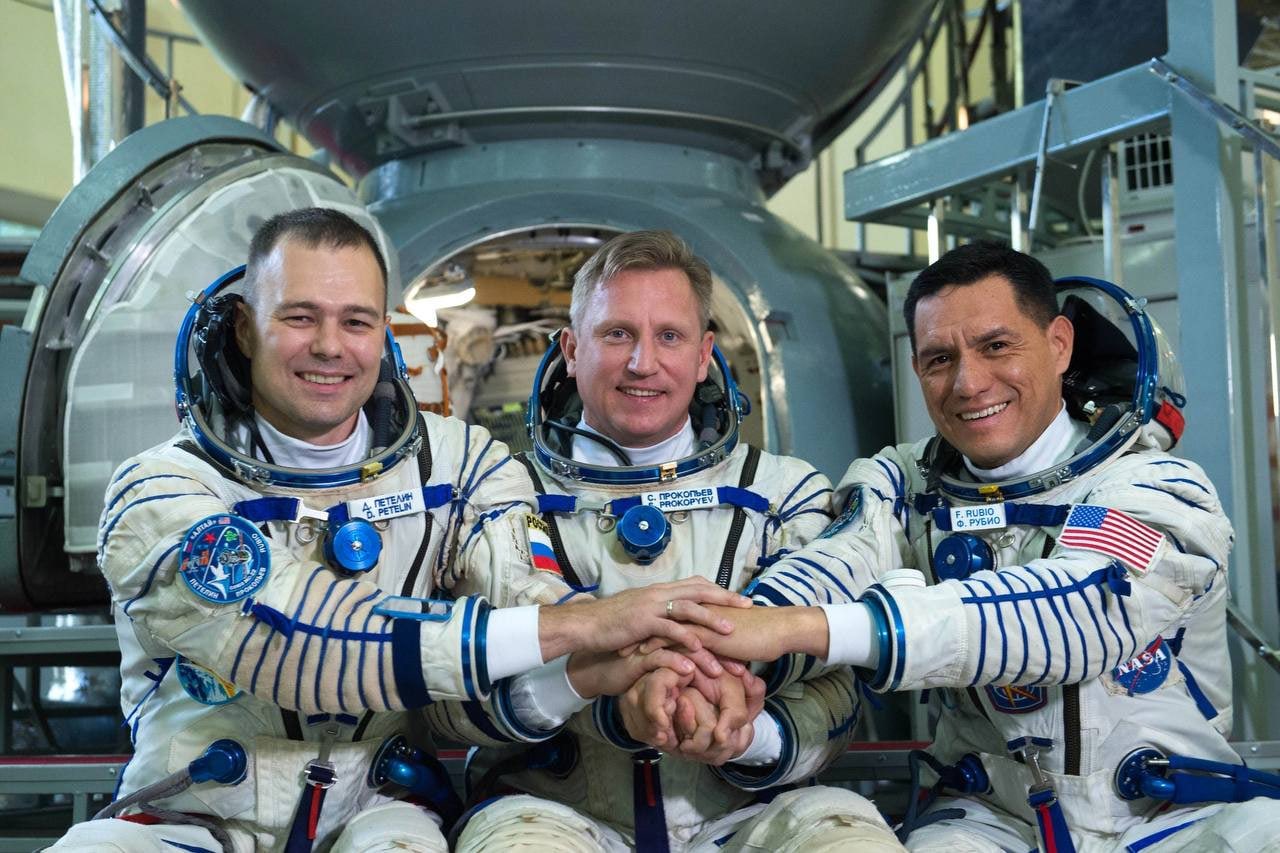 He worked for several years as an engineer before his selection as a cosmonaut training candidate on Oct. 12, 2012.

After two years, he was accepted as a test cosmonaut after training on L-39 aircraft, parachute operations, weightlessness training onboard a laboratory aircraft, diving instruction, and wilderness survival training.

He served as part of the backup crew for Expedition 65 from October 2020 to February 2021 before he was assigned as a backup cosmonaut to the Soyuz MS-19 mission from May to September 2021.

He was again selected for backup crew support from September 2021 to January 2022 before being elevated to the main crew of Soyuz MS-22 in March 2022.

Also making his first trip to space on this mission is NASA astronaut Frank Rubio. 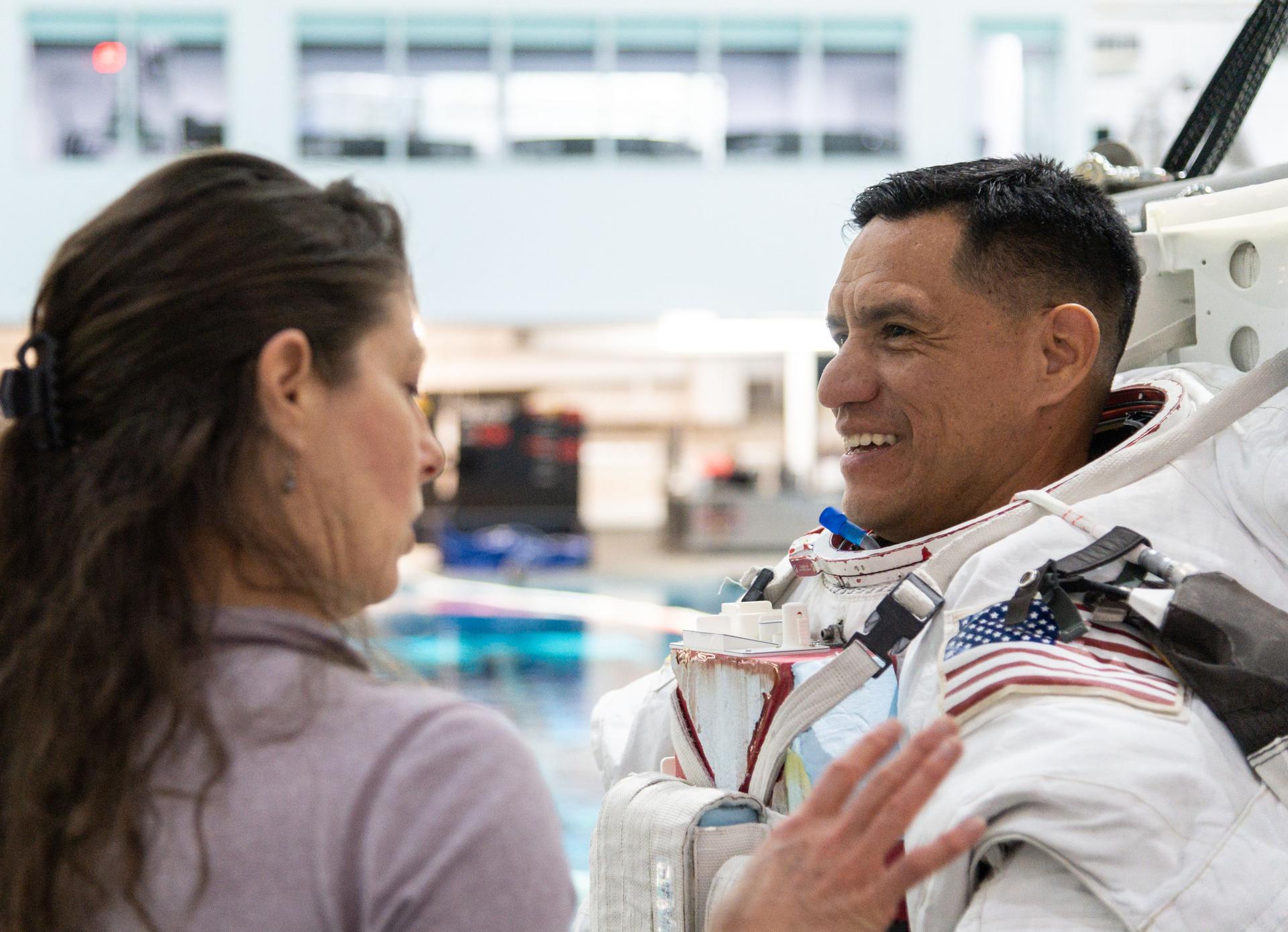 Rubio is a Major in the US Army as well as a helicopter pilot and flight surgeon.

He was born Dec. 11, 1975, in Los Angeles, California, and holds a bachelor’s degree in international relations from the US Military Academy and a Doctorate of Medicine from the Uniformed Services University of the Health Sciences. His specialty is in family medicine.

As part of his US Army duties, Rubio was a UH-60 Blackhawk pilot, platoon leader, and company commander. He has over 1,100 hours of flying time including 600 combat hours during military operations.

Rubio was selected as a member of the 22nd NASA astronaut group in 2017 and officially passed training two years later.