For many academics, we can point to a moment when everything just clicked and we realized that this life was for us. Often, that moment occurs at a conference. Conferences give you the chance not just to present your own work to others, but to learn what they are doing and to ask each other questions. There are social events and networking opportunities that can help your career. Even moments of inspiration. But most of all, it’s about being immersed in the intellectual life of the field to which you have devoted yourself. I’m sorry, but virtual and on-line conferences just can’t compare. The new MSc students, unfortunately, had spent their entire careers in the virtual world, at least until a few weeks ago.
(Image above courtesy of Conor Hayes and Western University Earth Sciences)

With nearly all of my Masters spent online, my graduate school experience has certainly not been exactly what I imagined when I began applying during my last year of undergrad. The group here at the Planetary Volatiles Lab has played a big role in keeping me indeed sane over the last 15 months or so (and was a significant reason why I accepted John’s offer to join PVL in the first place!). Though we’re still not yet in the clear, it’s starting to look like there’s a light at the end of the tunnel. If all goes to plan, York will be transitioning back to in-person classes this January, hopefully bringing back some sense of normalcy to this very strange period in our collective history.

While some aspects of the “typical” grad school experience, like colloquia and journal clubs, have survived the online transition fairly well, one big part has not fared quite as well: conferences. Since starting at York, I have attended several online conferences, including the Physics and Astronomy Graduate Student Conference, the Lunar and Small Bodies Graduate Forum (LunGradCon), and the Europlanet Science Congress (EPSC). Though I lacked a proper reference, having never attended a conference during undergrad, these online conferences seemed a bit “hollow”, for lack of a better term, without the kind of “realism” that comes with face-to-face interaction.

For this reason, I was excited (and a little bit nervous) to learn that we would be attending the annual joint meeting of the Geological and Mineralogical Associations of Canada, more efficacy known as GAC-MAC. On its face, this might seem like an unusual conference for our group to attend, since we are neither geologists nor mineralogists. However, we had been invited to help contribute to a special session, titled “Remote Sensing of the Earth and Planets” (and contribute we certainly did).

I have been told that submitting an abstract to a conference can be a good motivator to get work done, and that was certainly the case here. The month leading up to GAC-MAC was a frenzy of activity as I prepared results to the present, and I’m pretty certain that I was more productive in the last half of October than I was in the previous six months combined. I was assigned a poster presentation by the conference organizers, which was a new challenge for me. I wanted it to be relatively self-explanatory while not being stuffed full of tiny text, so I eventually settled on adding a QR code that to a website where I wrote up the details of my project in much greater detail than the poster’s limited space would allow. (Ultimately, only one person ended up scanning that QR code, but I still view the website as good practice for when I eventually have to write my theses.)

The conference itself took place from November 2nd to November 5th at Western University in London, Ontario. It was a relatively small affair, with a few hundred in-person attendees. Oral presentations were organized into six themed tracks: Tectonics and the Precambrian, Geoscience and Society, Mineralogy, Earth and Planetary Processes, Resource Geoscience, and Life and the Environment. I, along with most of the rest of PVL, stuck with Earth and Planetary Processes, both because it was the track in which our presentations were placed in and it was the one with which we were most familiar. Perhaps it was a missed opportunity not to explore the other tracks, but found that the presentations generally I assumed a certain level of background knowledge that I definitely do not have in any of the other areas, so I probably would have been hopelessly lost.

A particular highlight were the three plenary lectures, which seemed to be geared towards a more general audience than the quick 15-minute oral presentations. Though they were quite lengthy, I did not find my attention wandering elsewhere, which was quite impressive given that I frequently have difficulty focusing on any one thing for an extended period of time. The Thursday lecture, which was given by Dr. Robert Hazen on his work developing an evolutionary system for mineralogy, was my favorite of the three, as it combined mineralogy (something that I have essentially no background in) with planetary evolution and the history of the universe (which I am much more familiar with ) to create a unique way of classifying minerals in a more meaningful way than the current standards.

Going into my poster session Thursday evening, I didn’t really know what to expect. I was a bit nervous because, an oral presentation where you have a quasi-captive audience, there was no guarantee that anyone would be interested in hearing what I had to say about my work, particularly given that most of the other attendees were doing very different work than I was. Despite this (and perhaps because of it), I still had lovely conversations with five or six people, most of whom admitted that they knew nothing about lunar PSRs and let me info-dump on them. In a way, it reminded me of my favorite outreach projects, where I get to talk about the things that I love with people who don’t necessarily immerse themselves in those things on a daily basis.

Unfortunately, outside of our respective presentations, there was not much interaction between PVL members and the other attendees. This could be blamed on the fact that most of the social activities were, due to COVID restrictions, held outdoors, where we were greeted by an uncomfortable and unseasonal chill. That did not stop us from holding our own events though, whether that be meals together (either inside or outside of the hotel) or just existing in the same room as a group.

I don’t know if I came away from GAC-MAC with a much more comprehensive knowledge of either geology or mineralogy than I went in with. I still think this was a successful conference though, and not just because of how well our presentations went. Even if it was just for four days, being able to see the other lab members as more than a head in a box on a screen reminded me of how much I miss being around other people. Going back to Zoom group meetings has been a bit melancholic as a result, but I am hopeful that we’ll all be able to work together again before I graduate. 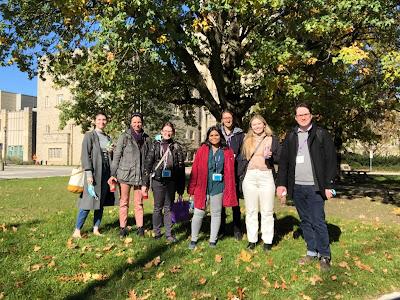 7 out of 10 PVL Group members at GAC-MAC