This summer was quite busy as we were preparing for the deployment of our MAPLE (Mars Atmospheric Panoramic camera and Laser Experiment) instrument to the highly foggy area of ​​Argentia, Newfoundland. There are two main field testing sites for MAPLE which includes a foggy location (large aerosols) and Arctic location (small, Martian-like aerosols). With the Arctic being more Mars-like, MAPLE will travel alone and be remotely controlled to fully mimic spaceflight conditions. However, as a starting point, we decided to travel with MAPLE to the Argentia, NL area to test in foggy conditions.

MAPLE is based on a previous experiment done by the Phoenix lander that took images of the onboard lidar laser to classify ice-water content of aerosols near the surface (https://photojournal.jpl.nasa.gov/catalog/PIA11030). However, the camera could only take an image of a small portion of the sky, limiting the view of the laser. MAPLE is equipped with a panoramic camera to allow the full sky to be captured, which also allows for multiple lasers to be in use at the same time and clouds to be monitored during the day. For Argentia, we equipped MAPLE with 8 different lasers in a variety of wavelengths and power (class) to try to determine if a specific set was better for future measurements. Adding different wavelengths of lasers allows us to also investigate the size of aerosols. To further increase the science output of MAPLE, we will employ techniques used with the Mars Science Laboratory (MSL, Curiosity) to calculate aerosol properties such as optical depth, wind properties and others. By using knowledge from previous Martian surface missions, we can develop MAPLE in a way to maximize the amount of returnable data in a low-cost way.

Defining a mission as low-cost means trying to find the minimal amount of power, data volume and size needed to acquire your measurements. Since we are in the early stages of the project, we created MAPLE from scratch using a pelican case which held our components. This includes a panoramic camera, 8 lasers and a raspberry pi that is used to control the camera. Several battery packs were used, one for each laser and a separate larger one for just the raspberry pi. As MAPLE gets more automated, the lasers will eventually be controlled by the raspberry pi and power can be more streamlined through just the Pi. The size of MAPLE seemed to work well, and windows had to be installed in the top for the camera and lasers to shine through. I never took construction in school, so I had a lot of late nights with the drill to push through two rectangles for the laser windows. Luckily, we already had a bubble panoramic window so I simply had to construct a properly sized hole for the window. Somehow, I managed to fully construct MAPLE and not injure myself. We also got humidity measuring packs to see how sealed the inside was. Minimal humidity was noted within the case, which is a win considering we were in essentially a cloud most times we were on the field. One concern we did have with keeping MAPLE low-cost was that the images were rather large and I only equipped the raspberry pi with a 32GB SD card. A lot of extra time was spent moving files over to a portable hard drive so we will be looking into upgrading the size of the SD card while also optimizing the size of the images. 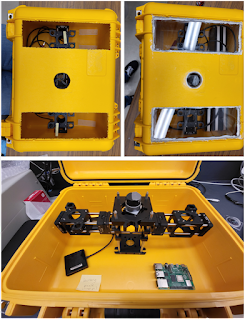 The field site itself was really beautiful and was a bucket list item for me as Newfoundland was the last province for me to visit in Canada. Interestingly enough, there were no rental cars available on the whole island for the 2 week we were wanting to travel. However, with the coming end of the foggy season we didn’t want to miss the opportunity to make observations. I love taking different methods of transportation and stumbled upon a ferry that travels from North Sydney, Nova Scotia to, lo and behold, Argentia. There were rental cars available in North Sydney so my colleague and I flew directly there, picked up the car and immediately took it on the ferry across to the island. We were able to get a room on the ferry itself with 2 beds, a bathroom, and the best view of the ocean. This was ideal as the ferry is about 16 hours long, overnight, so the bed was very much needed.

Once arrived, we got settled in the town of Placentia, which was a short drive to/from the field site which was in the port where our ferry was docked. They had a cool lifting bridge that was a great backdrop for determining when the fog was rolling in. We did most of our experiments back at our arrival dock. It was originally a World War 2 airfield site owned by the Americans, given by the British for the sole purpose of making it a Naval airbase. The Atlantic Charter was signed just outside the port which was thought to lead to the United Nations Charter (https://www.hiddennewfoundland.ca/argentia-naval-station). As someone who loves reading history, it was amazing to do the experiments in such an area. We were on one of the old runways as it was perfect for pointing the lasers in a way determine how far the lasers could travel. This was the goal for the first day on the site. 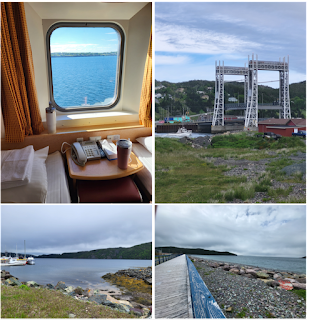 As always, something will go wrong on the field site and that was the case on our first day. When we first started testing, we expected to fiddle with the image parameters, such as exposure, to see the laser. However, no matter what we did we could not see any of the lasers in the images. We had not brainstormed what would happen in this case so we took a rather long lunch break to think about what we could do to mitigate the problem. We decided to try taking images anyways in the sun and increased the number of images taken for each laser configuration. The sun might be so bright in the day that the camera simply cannot view them in the image. We also decided to do some trial runs when it got dark. One evening, the fog rolled in so heavily that I got MAPLE all set up late in the evening. It got so foggy that it truly felt like I was in a horror movie or unsolved mysteries as I was unable to see a few feet in front of me. Images of what MAPLE could see in the dark showed how important the dark was to our experiments. After gathering a variety of images, we knew what the game plan was for the rest of the trip. 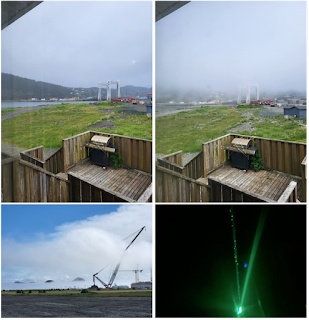 We finished our Newfoundland trip with images in both day and night that will be analyzed further. Many questions were both answered, and the trip was extremely useful on telling us how we need to prepare MAPLE for the Arctic. The trip was a challenge but a great way to gain leadership experience. Since I was not the only person on this trip, Grace has these words to say about her time on our field trip:

“Most of the research I’ve completed throughout my degree has consisted of analyzing data acquired from space missions – whether that be temperature, data or pictures taken from the surface of Mars. Because of this, my days usually involve sitting at my computer, writing code, and generally not moving around too much. Going to Newfoundland for fieldwork allowed me to explore different faces of research that I usually do not get to explore. Working with MAPLE meant driving out to the field site in the mornings, setting up the instrumentation, and taking several experiments to try and capture the science. There is a degree of unpredictability with fieldwork that we don’t normally experience in our day-to-day work. Will it be foggy enough? Will the batteries have enough power for the experiments? Will the inside of the instrument get too humid? Carrying out this fieldwork was a very unique experience, and I am so grateful to have the opportunity to try something new!”