As part of continued troubleshooting and seal replacement validation efforts, teams at the Kennedy Space Center in Florida will take the SLS rocket through a Core Stage and Interim Cryogenic Propulsion System (ICPS) fueling test on Wednesday, Sept. 21. NASA officials hope the test will reveal no leaks of the liquid hydrogen (LH2) system, which has so far plagued the agency in all fueling operations where the commodity was loaded onto SLS at the pad.

Should the fueling show good test performance of the new seals, and should the Eastern Range approve a waiver for the rocket’s Flight Termination System batteries, NASA might be able to attempt a launch of SLS on the Artemis I mission as soon as Sept. 27.

“Focus on the seals”

NASA was quick to stress on Sept. 19, before count operations for the fueling test began, that this was only a fueling test that was going to “focus on the seals,” said Tom Whitmeyer, Deputy Associate Administrator for Common Exploration Systems Development.

to NASA, the fueling test for the Core Stage and ICPS will see teams initiate engine bleed and thermal conditioning on the RS-25 engines, pre-pressurization demonstration, according to monitoring of the Core Stage LH2 tank “for a period of time,” Whitmeyer.

Numerous agency holding officials stressed that the count would not reach the T-10 minute and mark and that teams will not enter the terminal count.

Furthermore, the Orion spacecraft and the twin solid Rocket Boosters flanking the Core Stage will not be powered on for the fueling test. NASA officials also noted that no range assets or input will be required for the Sept. 21 test.

A particular point of the test is taking the entire system through a “kinder, gentler loading operation.”

Whereas liquid oxygen has a density similar to water and requires pumps to move the commodity from its storage facility in the northwest section of Pad 39B to the rocket and up into the tanks, liquid hydrogen is different. Being less dense, pumps are not required, and pressure is used instead to move LH2 from its commodity sphere on the northeast side of the pad to the Mobile Launcher and up into the vehicle.

This use of pressure, as well as the sequencing of when chilldown operations to thermally condition the LH2 systems for fueling operations begin, is part of a multi-branch fault tree analysis NASA is using to mitigate any potential issues with the system.

The LH2 flare stack is visible during the second Artemis I launch attempt on Sept. 3. (Credit: Jack Beyer for NSF)

Parts of the new procedures involve using a lower LH2 pressure at the beginning of chilldown operations. The new, lower-pressure environment will be used up until fast-fill operations for the Core Stage begin.

Test teams arrived on console in the Launch Control Center, a moment called “Call to Stations,” at 3 PM EDT (19:00 UTC) on Monday, Sept. 19.

Tuesday saw teams perform final walk-downs of the vehicle, mobile launch tower, and launchpad itself before ensuring that all gaseous nitrogen (GN2) systems were properly configured.

The blast danger area was then cleared of all nonessential personnel at T-9 hours, or 3:40 AM EDT (07:40 UTC) Wednesday morning.

Air-to-GN2 handover then took place at the T-7-hour 15-minute mark, after which point a 2.5-hour built-in hold began. During this hold, test teams are expected to give a go for loading operations.

Under a nominal timeline, the pre-pressurization test will come around 1 PM EDT (17:00 UTC) at the T-2-hour 18-minute mark in the countdown. This will be followed by a wrap of all critical operations by 3 PM EDT (19:00 UTC).

Need for the test

The need for the Sept. 21 tanking test stems from a major leak of LH2 at the 20-cm (eight-inch) quick disconnect seal on the Tail Service Mast Umbilical (TSMU) during the Sept. 3 launch attempt.

The next #Artemis press briefing is coming up in 30 minutes. pic.twitter.com/Yy5T7rU7qD

During that attempt, the amount of hydrogen in the ambient air of the enclosed umbilical breached NASA’s four percent conservative safety limit. Hazardous gas detectors registered an eight percent concentration that was repeated during the multiple attempts to fix the seal issue.

Following a forward path to remove and replace the suspect seal, as well as other seals and soft goods on the TSMU at the pad ahead of a fueling test, engineers and technicians identified a 0.02-cm (0.01-inch) witness mark or defect/ indentation in the seal.

This witness mark would normally be indicative of Foreign Object Debris (FOD); However, numerous closeout photographs of the system show no FOD present in the area.

NASA officials pointed out that FOD was only one potential cause of the defect on the seal and that the over-pressurization event and thermal issues seen during the Sept. 3 attempt could also be performed contributing factors given that the seal perfectly during the Aug. 29 launch attempt.

Pending the outcome of the fueling test on Sept. 21, NASA’s options for launch remain somewhat nebulous in terms of when SLS might lift off on its first launch. Complicating matters is the need to properly review all data from the fueling test before committing to a launch. And that assumes the fueling test reveals no further leaks or issues. 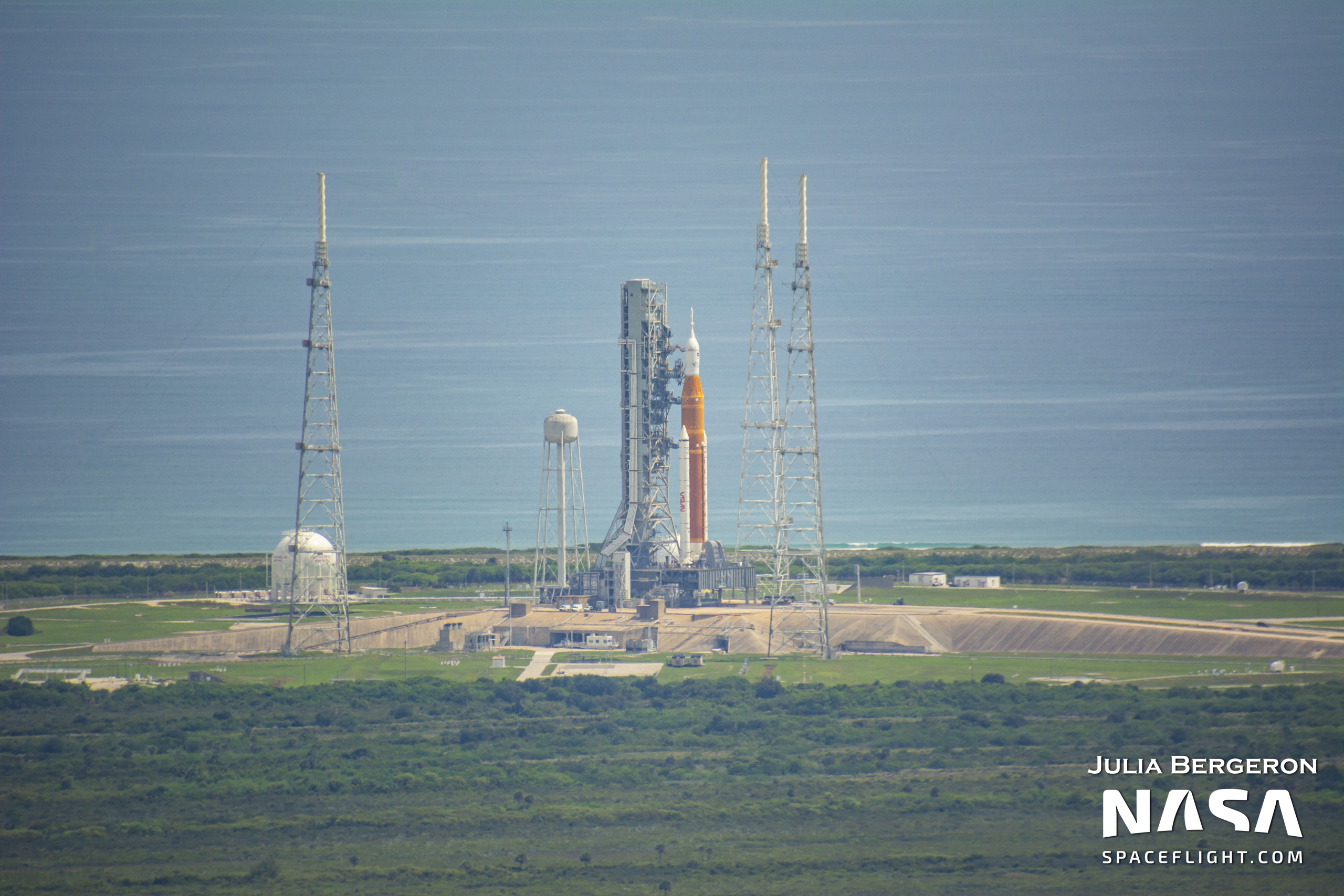 Artemis I at LC-39B. (Credit: Julia Bergeron for NSF)

Further complicating the situation are the Flight Termination System (FTS) batteries onboard SLS, which have breached their certification limit of 25 days. That previous certification ended on Sept. 6, and the Eastern Range is responsible for utilizing the FTS should the rocket deviate from course and the need to protect air, land, and sea assets arises.

NASA has submitted paperwork and documentation to Eastern Range officials showing that they believe the FTS are still within certification parameters. If this is held true, a waver can be issued by the Range to permit the Sept. 27 and Oct. 2 launch attempts without the need to roll SLS back to the Vehicle Assembly Building to retest the FTS batteries.

However, the Range is not expected to issue a decision until after that fueling test is complete, and it is possible that yet more data will be needed from NASA for a decision to be reached.

“We need to see where those discussions take us,” noted Whitmeyer. “We’re being respectful of their process.”

From NASA’s perspective, the next major formal decision point following the Sept. 21 test will come on Sunday, Sept. 25 during the L-2 day Mission Management Team meeting. 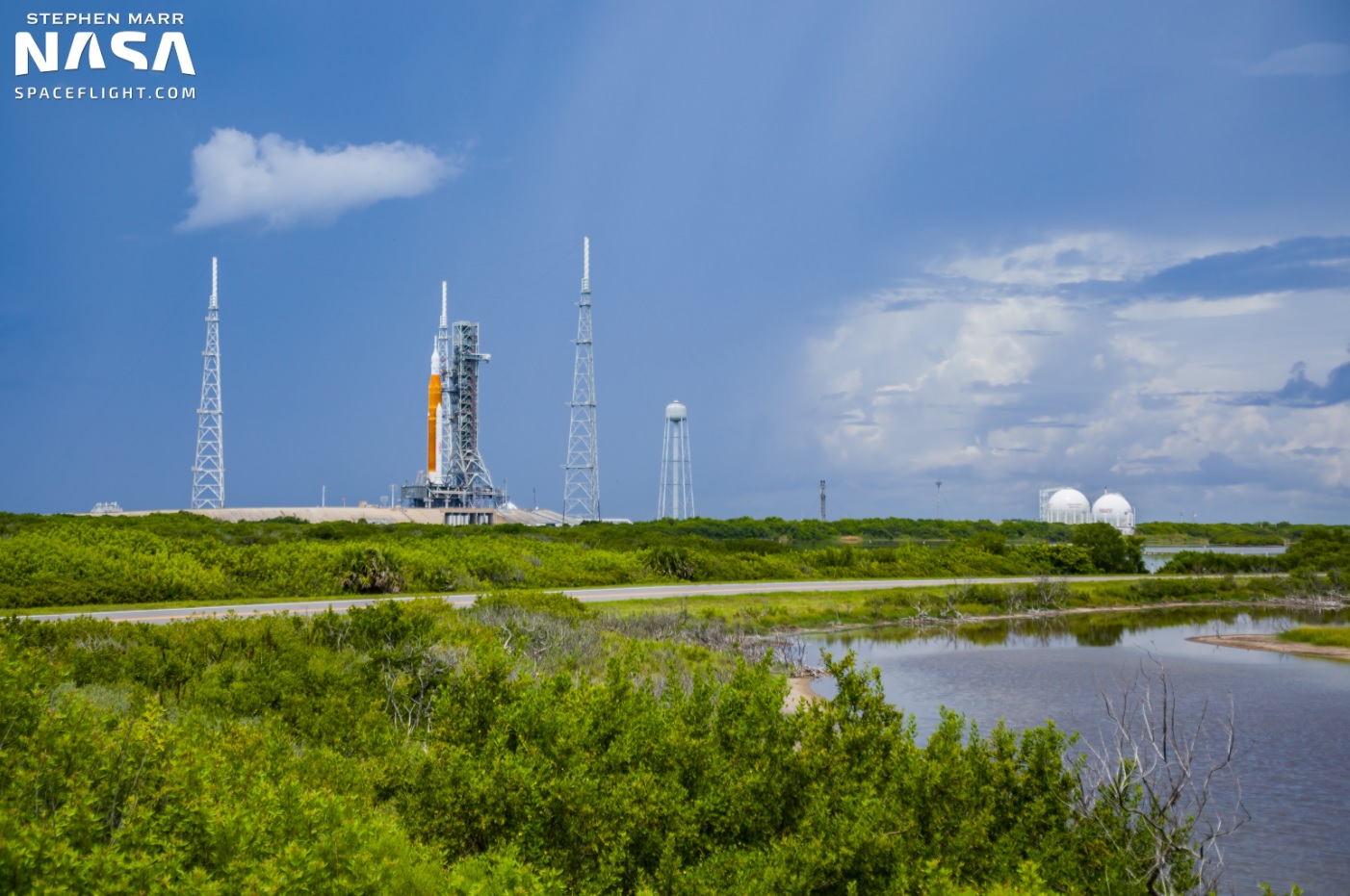 Artemis I at LC-39B. (Credit: Stephen Marr for NSF)

It is at this meeting that all formal waivers will be formally discussed and accepted (usually) and at which the final decision from the agency as to whether or not to proceed to a launch attempt on Sept. 27 will be reached.

However, NASA officials noted that a decision could come earlier than Sunday should the fueling test go well and the Eastern Range provide their answer.

The Oct. 2 launch would also result in a long-class mission with a landing in the first half of November.

(Lead photo: The business end of SLS, including the TSMU. Credit: Nathan Barker for NSF)