The Sign we’re in, Libra, is indicated as the ruler and regulator of the three aspects of the Third Ray: Law, Sex and Money.

Here are some illuminating indications on the subject from the third volume of the Treatise on the Seven Rays: Esoteric Astrology (p. 233-246).

Libra is “closely connected with the third aspect of the Godhead and hence it is a governing sign and a major conditioning factor where Law, Sex and Money are concerned. … All the three divine aspects in themselves are triune and manifest in three manners or through three lesser aspects and this third aspect is no exception to this rule underlying all the triplicities which condition the processes of evolution and manifestation. It is through a study of Libra that light upon the third aspect will come. The first aspect of will or power expresses itself in this sign as Law, as legislation, legality, justice; the second aspect manifests as the relation between the pairs of opposites (of which the scales are the symbol) and upon the physical plane shows itself as sex; the third aspect demonstrates as concretised energy and this we call Money. It is literally gold and this is the externalised symbol of that which is created by the bringing together of spirit and matter upon the physical plane. The third aspect is, as you know, the creator aspect and the energy which produces the outer tangible plane of manifestation—the form side of life.

If students will, therefore, make a careful study of these three—law, sex and money—as they express themselves today and as they can express themselves in the future, they will have a picture of physical human achievement and of future spiritual expression which will be instructive and most worthwhile.
(…) It is because of this balancing quality in Libra that this constellation can be associated more specifically with the problem of sex than can any of the others. Sex is usually connected in the mind of the average astrological student with the signs Taurus and Scorpio. This is probably due to the fact that the Bull is so frequently regarded as the symbol of the mad urges of the uncontrolled sex principle and because in Scorpio fundamental tests are applied. For most aspirants in the early stages, sex does constitute a fundamental problem. Esoterically, however, is in Libra that the whole question comes up and it will come up for answering, and it is in Libra that the balancing of the pairs of opposites must take place and reach solution the activity of the judicial mind and the establishing of a point of equilibrium between the male and the female principles. This again (for it is a piece of recurrent symbology) is the problem basically existing between the Sheep and the Goats, between negative and positive, and between those who blindly follow either instinct or custom and those who climb freely where they choose and are self -directed in conduct and attitude. This self-direction may lead them in either direction upon the wheel of life, following either selfish desire or spiritual aspiration, but the point to have in mind is that, judicially and with intent and after due reflection and balancing of the various ways, they then do as they will and as it seems to them right and desirable.
This is of itself of a basic usefulness and thereby they learn; for all action produces results and the judicial mind weighs cause and effect more correctly than any other.

It is not my intention here to indicate the solution of the problem of sex. Humanity will inevitably work it out as the aeons slip away and as the herd instinct gives place to the premeditated and self-conscious attitudes of the aspirant and the intelligentsia. I would remind you, however, that the herd instinct in relation to sex has its basis either in normal and natural animal instinctual desire or in emotional attitudes, and of these the last category are by far the worst and carry with them by far the more deep-seated seeds of trouble. They range all the way from the stage of free love and a general promiscuity to the orthodox narrow and bigoted Christian angle, as that is normally understood though not in the sense in which Christ viewed life. This narrow viewpoint and the normal Anglo-Saxon attitude (an outcome of the teaching of the Middle Ages) regard sex as unusually sinful, ever undesirable, and as something to be lived down and overcome, and kept secretly in the background of the Christian consciousness , where it is hidden as a prurient mystery. This again is due to the influence of St. Paul but not to the teaching of Christ.

From these attitudes, there has been a violent reaction which is today at its violent height and this, in its turn, is both undesirable and dangerous, as are all reactions, for the one is as untrue as the other; it is at the center of the scales or at the hub of the wheel that the true perspective and indicated action can be seen correctly. When the basic “sex” relation is finally established and soul and body (negative and positive) are permanently related in the lives of the world aspirants, then we shall see the right handling of the world teaching on the subject of physical sex. 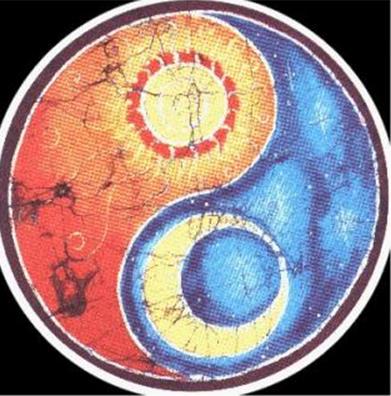 This teaching will come from the merging and synthesis of the best views of all the spiritually minded teachers in both hemispheres, embodying the experience of the East and of the West, and of the mystical and the scientific approaches to a mystery which is both physical ( requiring scientific understanding) and mystical (requiring spiritual interpretation). It will involve the aid and conclusions of the medical profession in order to give the needed wise, physical instruction and the aid also of the cultural knowledge of the yogis of India in connection with the energy flowing through the centers—in this case the sacral center . Finally, through the intelligent activity of the judicial and legal-minded men of the world, the search for a balanced and desirable point of view will come to an end. Out of the many sexual experiments now going on, the coming generation will arrive at a point of balance and then, as a consequence, they will tip the scales in the desired and desirable direction. Of this there is no question of doubt; there is only the point in time and this will be astrologically determined. Through the legal minds and through right legislation, sex will eventually be seen to be a proper divine function and will then be safeguarded by right education of the young and the ignorant, and the right action of the young and highly intelligent emerging generation—the children and babies of today. [editor’s note: written around 1940].

The teaching of wrong sexual habits, the example of widespread prostitution (I use this word in connection with men as well as women), the growth of homosexuality (not in its rare physiological forms and predispositions but from the angle of a perverted mentality and an unwholesome imagination, which today lies behind so much of its expression), the narrow-minded Christian inheritance of a “guiltcomplex” where sex is concerned, and the heritage of diseased and over-or under-sexed physical bodies, have brought the race to its present chaotic and unintelligent handling of the important problem. The solution will not be found through religious pronouncements, based upon an outworn theory, or through physiological inhibition or legalized license; Neither will it come through legislation, inspired by various schools of thought in any community or nation. It will be the result of the united activity of the spiritually minded consciousness, the judicial attitude, the intellectual perception and the steady urge of the evolutionary process. Nothing can prevent the inevitability of the solution and the appearance of desirable attitudes and conditions wherein sex can find a right expression. 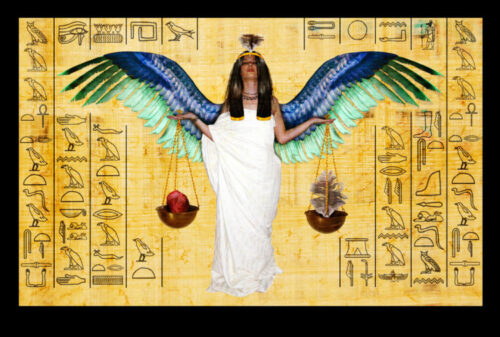 Libra, as you know, governs the legal profession and holds the balances between so-called right and wrong, between negative and positive and also between East and West. This last point of adjustment may seem to you to be a meaningless phrase, but when the true and right relationship is established between the orient and the occident (which is not yet the case) it will come about through the activity of Libra and the work of the legal profession.

Libra has been the “sponsor of the law”. Legislation has hitherto been engrossed with the enforcing of those negations and those attitudes of fear which have been preserved for us in the Mosaic code and imposed through the medium of punishment for infringement. This has been a probably necessary stage for child races and for the preservation of a “nursery regime” for men. But mankind is reaching maturity and a different interpretation of the purposes and intents of Libra through the medium of law is now required. The law must become the custodian of a positive righteousness and not simply the instrument of enforcement. Just as we are attempting to eliminate force out of our national relationships, and just as it is obvious today that the process of drastic penalties has not succeeded in preventing crime or in deterring people from violent selfishness (for that is what all crime is), and just as the social attitude (in contradistinction to the anti-social position of all law-breakers) is being regarded as desirable and taught in our schools, so it is beginning to dawn upon the public awareness that the inculcation of right relations and the spread of self-control and the growth of unselfishness (and these surely are the goal, subjective and oft unrealised, of all legal procedure) are the needed approach to the young.

The influence of Libra should be imposed in childhood along spiritual lines. Crime will be stamped out when the environing conditions in which children live are bettered, when physical attention is given in the early formative years to glandular balance as well as to teeth and eyes and ears, to right posture and correct feeding, and when there is also a more proper apportionment of time; when esoteric psychology and esoteric astrology give their contribution of knowledge to the bringing up of young people. The old methods must give way to the new and the conservative attitude must be dropped in favor of religious, psychic and physical training and experiment, scientifically applied and mystically motivated. When I say religious, I do not refer to doctrinal or theological teaching. I mean the cultivation of those attitudes and conditions which will evoke reality in man, bring the inner spiritual man to the foreground of consciousness and thus produce the recognition of God Immanent. 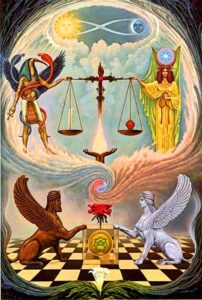 (…) Uranus is the esoteric ruler and is of supreme importance in this sign for the seventh ray works through this planet and is the embodiment of the principle of concretion and the materialising of that which is in need of objective manifestation, through the bringing together of spirit and matter. It is here that the whole mystery of money lies hid and the creation and production of money. I would like here to point out to you that it is with the third aspect of divinity and the third aspect alone that the creative process is concerned. It is through the relation of the three aspects of the third divine manifestation—law, affinity and concretised energy—that money is created.

(…) It is not The bringing together of spirit and matter as occultism understands those terms but the relating of physical need and physical supply and the bringing together of two tangibles through the power of the creative imagination. (…) I have here given you hints which can be fruitful of result if interpreted correctly and acted upon from right motive, in group formation and with selfless purpose.” 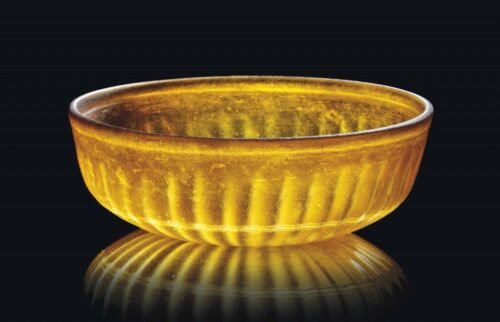