The Indian space program’s new small satellite launcher, the SSLV or Small Satellite Launch Vehicle, is scheduled to make its launch debut from Sriharikota, India on Sunday, August 7 at 03:48 UTC.

The SSLV program’s genesis was a December 2015 National Institute of Advanced Studies proposal to create a “Small Satellite Launch Vehicle-1” to launch small national security payloads on demand and with a lower cost and higher cadence than the Indian Space Research Organization’s existing rockets could provide.

The SSLV program started in late 2017 in response to these calls for a small satellite launcher. Approximately one year later, the Vikram Sarabhai Space Center (VSSC) had finished the design of the vehicle, which is 34 meters tall, two meters in diameter, and weighs 120 tons.

The SSLV has three solid-fueled stages and a fourth stage known as the Velocity Trimming Module. The VTM, which uses storable liquid monomethylhydrazine (MMH) and mixed oxides of nitrogen (MON3), provides roll control for the second and third stages as well as the ability to inject multiple payloads into different orbits.

The first stage of the SSLV is known as the SS1 stage. It uses an S85 solid rocket motor and features a core base shroud at the bottom equipped with four fins to control the vehicle during ascent. The SS1’s maximum thrust is 2496 kN in vacuum with a listed burn time of 94.3 seconds, and it contains 87 tons of solid fuel.

The SS1 uses three segments with bond-free joints, an electromechanical actuator, and digital control electronics. In addition, there is an optimized ignitor to start the motor, which uses a commonly used solid fuel known as HTPB (hydroxyl-terminated polybutadiene).

The second stage, known as SS2, uses an S7 solid rocket motor with a maximum thrust of 234.2 kN in vacuum. The S7’s burn time is listed as 113.1 seconds and is similar to the S7 used on the PSLV, albeit with less thrust and a longer burn time. SS2 contains 7.7 tons of solid fuel.

The Velocity Trimming Module on top of the SSLV uses 16 MMH/MON3 thrusters, each capable of producing 50 N of thrust. Eight of the thrusters are used as RCS jets to change the stage’s orientation in space, while the other eight are used as axial thrusters for velocity changes that can alter the stage’s orbit. The VTM contains 0.05 tons of the hypergolic liquid fuel.

The SSLV is designed to launch up to 500 kilograms to a 500-kilometer altitude, 45-degree inclination low Earth orbit, or 300 kilograms to a 500-kilometer altitude sun-synchronous polar orbit. In addition, the vehicle can carry various combinations of CubeSats and micro or mini-satellites. The SSLV can carry up to 64 2U CubeSats or 24 6U CubeSats into orbit, or combinations of different sizes.

The SSLV is designed to use far less infrastructure than earlier Indian space launch vehicles. It is designed to take 72 hours to set up, with a team of six people to oversee launch preparations. By contrast, the PSLV requires a much larger team and up to 70 days of lead time to be ready for a mission.

The SSLV’s road to the launch pad has not been without challenges. The SS2, SS3, and VTM had all been developed and tested successfully. However, the SS1’s first test, on March 18, 2021, failed after oscillations were noticed at the T+60 second mark.

At T+95 seconds, the nozzle was blown out at the point where it joins the rocket motor. The test was supposed to last 110 seconds. The SS1 had to be redesigned, and it finally passed its firing test in March 2022. 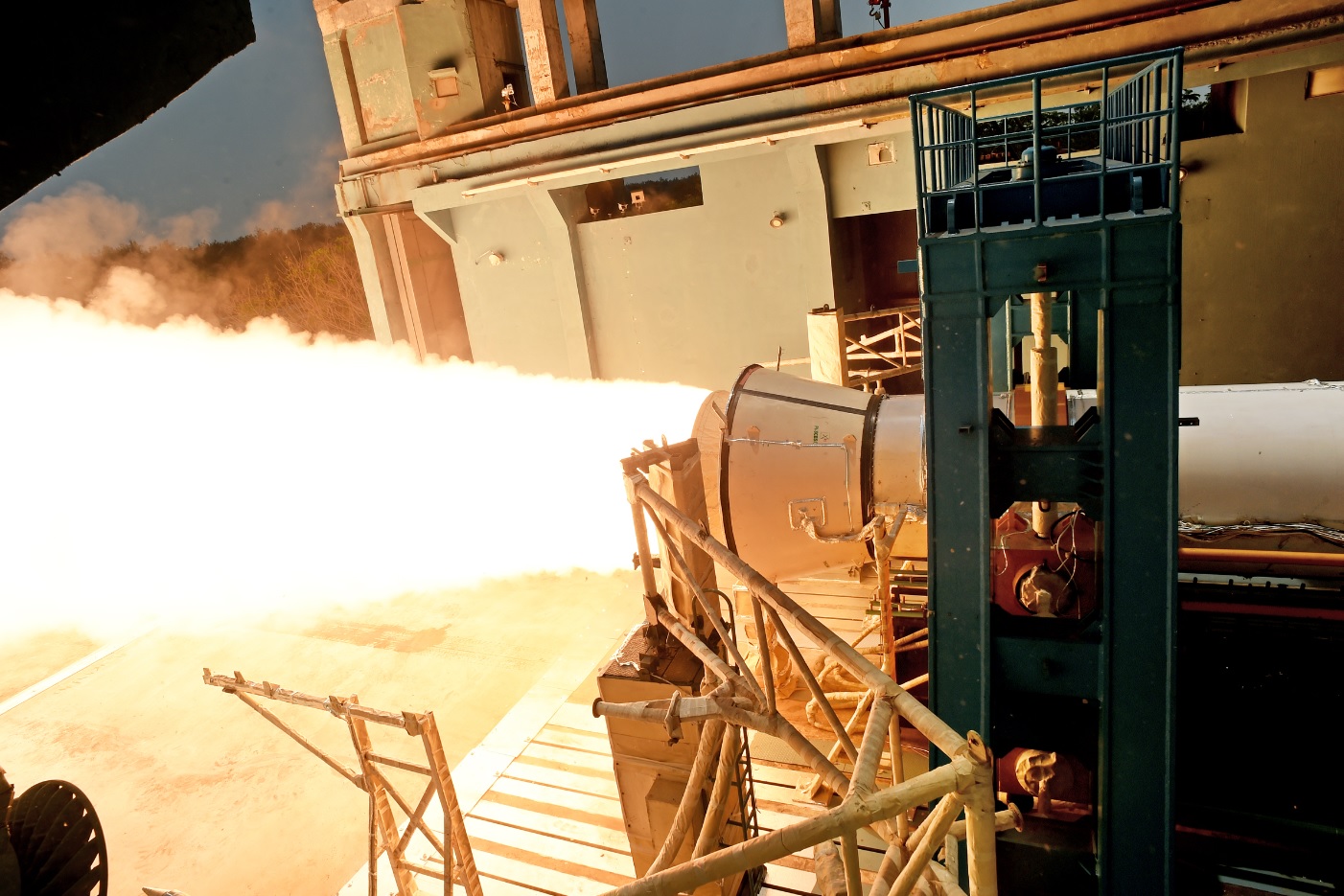 The SSLV was originally scheduled to fly in late 2019, with commercial satellite launch operations beginning in early 2020. However, the COVID-19 virtually shut down the Indian space program for an extended period.

The pandemic and the March 2021 SS1 test failure further delayed the program. Floods in Andhra Pradesh in late 2021 – the state that Sriharikota is located in – also delayed preparations for the flight along with other ISRO launches and activities.

Now that the SSLV is finally ready for its first flight, it is tasked with carrying the EOS-02 Earth observation microsatellite as its primary payload. EOS-02, formerly known as Microsat-2A, masses around 145 kilograms and is equipped with mid-wavelength and long-wavelength infrared cameras. The optical system’s maximum resolution is six meters.

EOS-02’s expected mission lifetime is ten months. The satellite’s primary mission will be for Geographic Information Systems (GIS) applications like cartography, urban and rural management, coastal land use and regulation, and utilities mapping along with other GIS purposes. 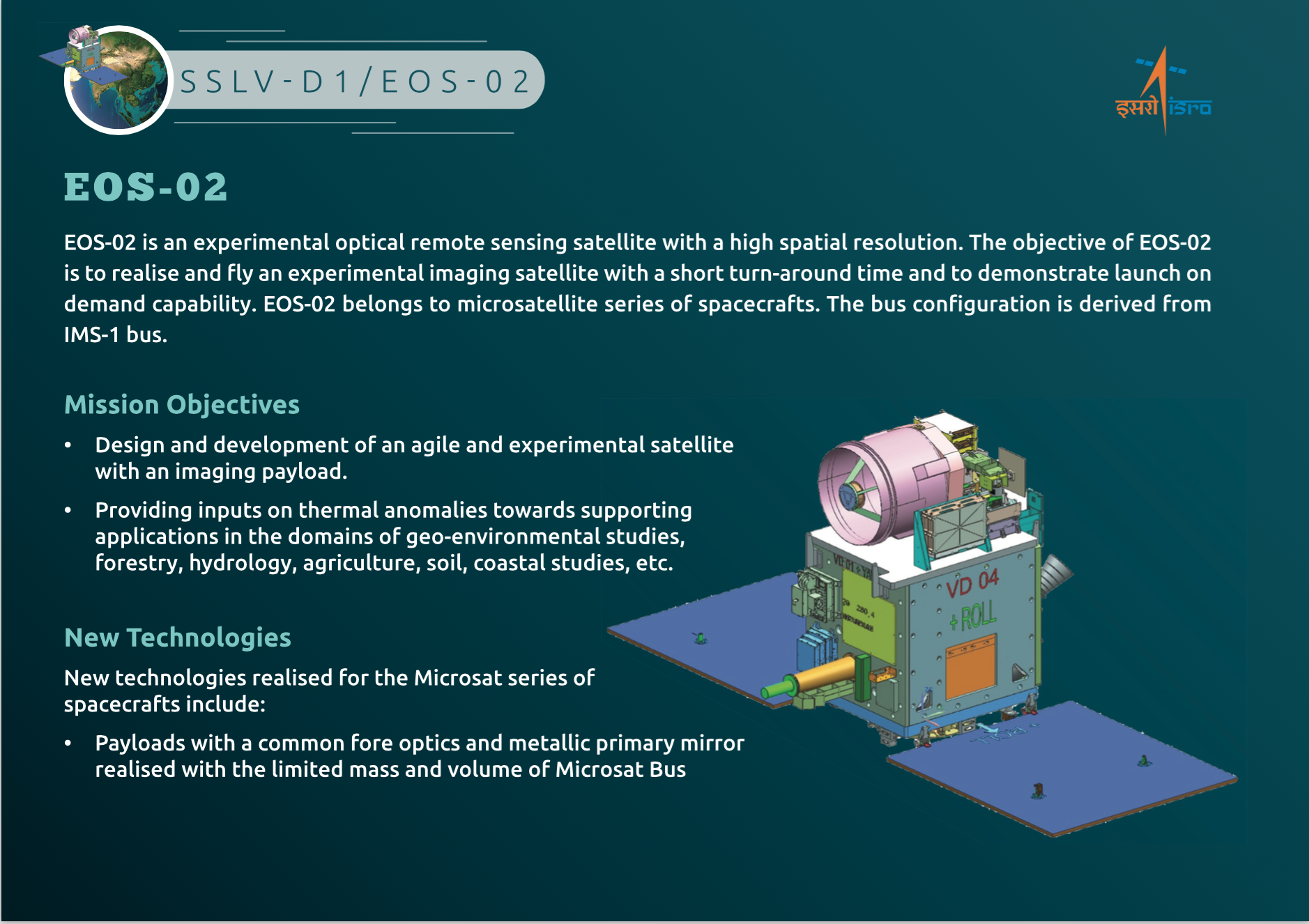 A slide detailing the primary payload on board SSLV. (Credit: ISRO)

The secondary payload on this flight is an 8U CubeSat known as AzaadiSAT. The AzaadiSAT, massing eight kilograms, was created to mark India’s 75th year of independence. This anniversary is being marked this year by the Azadi Ka Amrit Mahotsav celebrations throughout the country, and the CubeSat is part of this.

AzaadiSAT was built by schoolgirls from 75 schools across India. 10 girls from each school were involved, for a total of 750 students involved. The mission was created to give girls from lower-income backgrounds the opportunity to learn the fundamentals of spaceflight, as part of the United Nations theme of “women in space.”

The CubeSat contains 75 payloads massing fifty grams each, which will perform femto-experiments (experiments of small size). There is also a UHF-VHF transponder set to ham radio frequencies to allow voice and data transmission for amateur radio operators.

A counter to measure ionizing radiation in the spacecraft’s orbit is also present, along with a long-range transponder and a camera to take “satellite selfies” of its solar panels. The CubeSat’s mission is expected to last for six months.

The SSLV-D1 mission is launching the EOS-02 primary payload to an altitude of 356.2 kilometers in an orbit inclined 37.21 degrees to the equator. This inclination will allow EOS-02 to observe all of India. It will be launching from the First Launch Pad at the Satish Dhawan Space Center on a 135-degree azimuth. 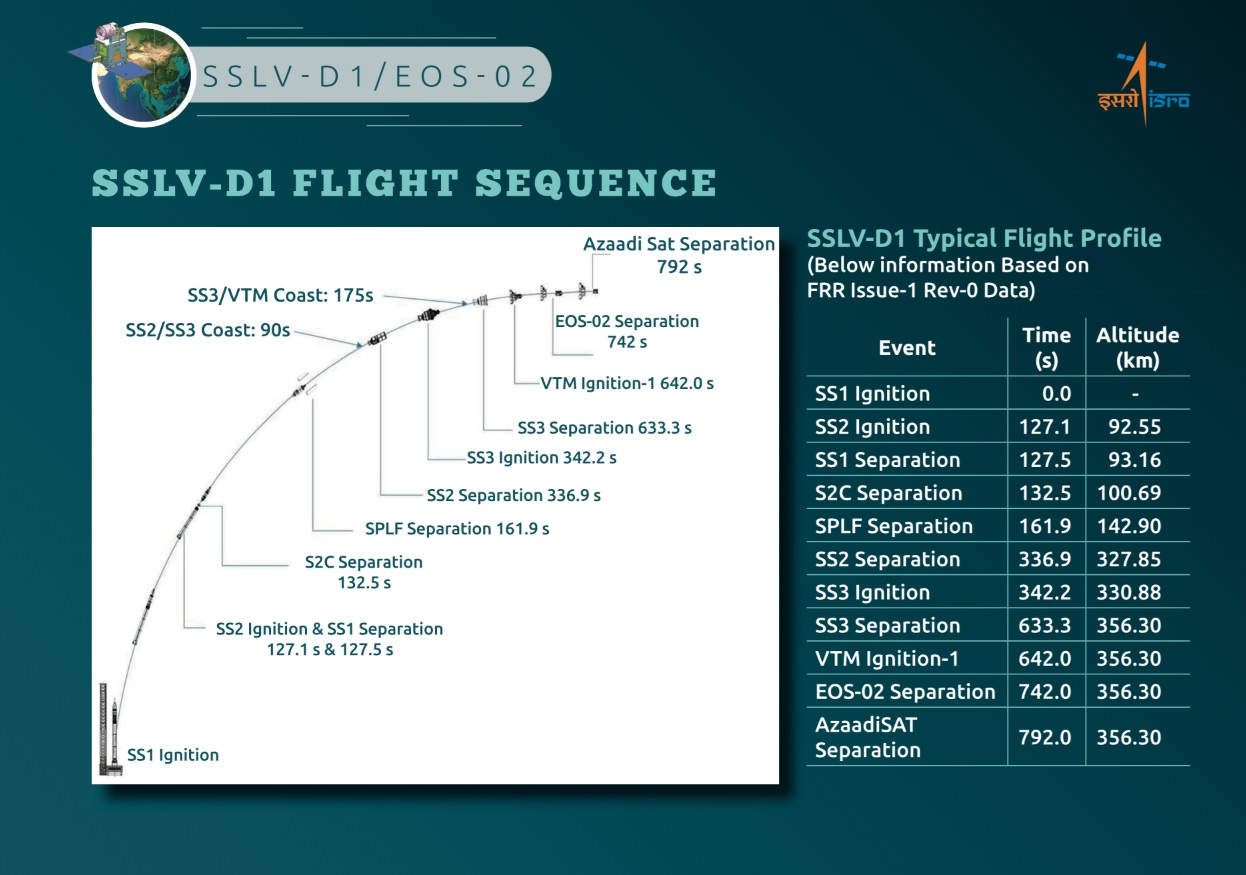 The SS1 stage will separate at 127.5 seconds into the flight, after SS2 has already ignited. This is made possible by a vented interstage, to allow a “fire in the hole” ignition. The composite payload fairing will separate at the 161.9-second mark, and SS2 will separate at 336.9 seconds.

SS3 ignition occurs at 342.2 seconds after a short coast period, and separation is at 633.3 seconds. After another coast period, the VTM will ignite its thrusters at 642 seconds. At 742 seconds into the flight, EOS-02 will separate, and the mission will end at 792 seconds with the AzaadiSAT separation.

A dedicated Small Satellite Launch Complex (SSLC) will be set up in Sriharikota, and a launch site in the southern state of Tamil Nadu will be set up for sun-synchronous polar launches.

The launch site in Kulasekarapattinam will allow the SSLV to fly on a trajectory that both avoids Sri Lanka and the need for a “dogleg” maneuver, which must be done for these launches from Sriharikota.

The SSLV program adds a dedicated small satellite launch capability to India’s space portfolio, as ISRO works to rebound from COVID and flood-related difficulties. The SSLV is another step in India’s ambitions to develop its space sector during this decade and beyond.