Today we celebrate the ninth of the 12 Festivals of the new world Religion, the Full Moon of Virgo, the festival aimed at asserting the Will to nourish and manifest the Christ and at grasping and understanding, through the consciousness of the Disciple-Humanity, the Mystery of Form, since Form is the crystal of Creation, the instrument through which divine manifestation is accomplished. (1)

On such a Date the Idea of ​​Form resonates powerfully, that significant support that sustains the Manifestation of the Spirit and indicates the imprint of Being.

The symbology of Virgo, the Mother, “concerns the whole goal of the evolutionary process which is to shield, nurture and finally reveal the hidden spiritual reality. This every form veils…”, “the mother protects the germ of the Christ life; matter guards, cherishes and nurtures the hidden soul. The keynote which embodies the truth as to the mission of Virgo most accurately is ‘Christ in you, the hope of glory’.” (2)

“Virgo is, therefore, the cosmic mother because she cosmically represents the negative pole to positive spirit; she is the receptive agent where the Father aspect is concerned. (…) It is in this system that the Christ Child, the expression of the divine consciousness and the result of the relationship of Father-spirit and Mother-Matter, must he brought to the birth.” (3) Virgo is therefore the invisible Light of God that permeates and nourishes the nascent Christ principle.

“Blessed is the mother who draws open the curtain to let in the light, and who offers the first blossom. In quiet, in beauty, and with a smile, Await those new ones seeking entry into the world.” (4)

The Moon (veiling Vulcan) teaches us the use of the will and how to redeem substance through the forging in fire; the Moon, the esoteric ruler of the Sign (for disciples and initiates), combines the energy of the Fourth Ray, which it conveys, with that of the First Ray, which is externalized through Vulcan, and which symbolizes the divine will to use the form to manifest itself.
According to the Teaching, in fact, the form is “the model according to which nature does its external work” and therefore “Life precedes the form and the divine ideation passes from the abstract to the concrete”; “Spirit evolves from form and through form“: for this reason the Spirit, that animates everything, needs to gain full self-awareness through the evolutionary cycle in order to be free from the prison and limitation of form, thus acquiring the light of the “crystal” of experience. 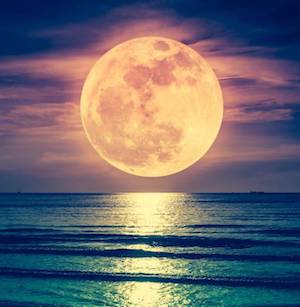 Today, therefore, on the day of the Full Moon, ideally united with all those who in every time and in every place work for the Common Good, let us invoke and evoke as one planetary server the:

Will to nourish and manifest the Christ

Christ “demonstrated in Himself the full expression of divinity, and then enjoined upon His disciples that they should go and do likewise. (…) The cell in the womb, the stage of littleness, the development of the child into the man—to all this He submitted Himself, and underwent all the processes which are the destiny of every son of God.” (5)

“The conscious evocation of the Christ Life in the human heart and our rapid integration into the kingdom of God are the immediate tasks ahead, embodying our responsibility, opportunity and destiny”“. (6) 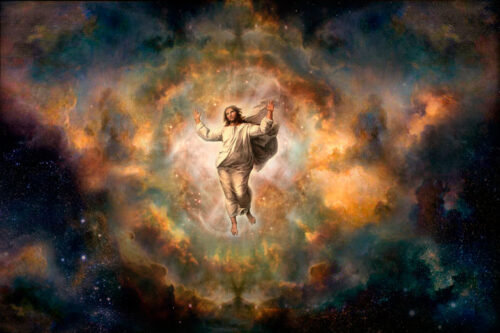 Urged by the energy of the Full Moon, with the image of Christ imprinted in the heart and the gaze turned towards the Heavens, human consciousnesses must make that transfiguring journey (which also pertains to every other form) which will lead, in the near future , to the initiation of Resurrection, in which the life aspect of divinity makes its presence felt; Resurrection is in fact that eternal identification with God which is the imperishable experience of all those who have reached perfection.

“Christ revealed the quality of the divine nature through the medium of matter, of form” and was transfigured in front of some of his disciples. “The Greek word here used [for transfiguration] is ‘metamorphosed’, the very word used by St. Paul to describe the transmutation of the mortal body into the resurrection body; for on the day of fulfilment, when the perfected disciple has attained masterhood, the ‘Robe of Glory’ shines forth with such splendour through the garment of the flesh that all the beholders perceive it, and, their eyes and ears attuned to finer subtle vibration , they behold their Master in all His divine humanity.” (7)

The Will to nourish and manifest the Christ, which is expressed in Virgo through the esoteric ruler, the Moon, expands in the consciousness of the Disciple-Humanity

The Mystery of Form

Form is the crystal of Creation

This Full Moon thus manifests the redeemed part, transfigured by sunlight, of the Substance; Substance is in fact that part of Space (Mother) which pertains to each one and which waits for nothing other than to reveal itself in its Light as the basis of human Brotherhood.

“The Mother of the World has a veiled face.
She is silent: but she feeds and contains all the names
and all the fires that are lit in the Universe.” (11) 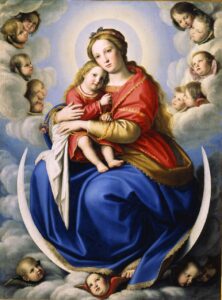 1. In this year 6.1, the first of a septennium dedicated to the Idea of ​​a New World Religionwe intend to celebrate the dates of the full moonsthe sacred “doors” of alignment and synchronization between the three celestial symbols of manifestation, human (Sun/Soul, Earth/Personality, Moon/Bodies) and planetary (Planetary Hierarchy, Humanity, lower Kingdoms), associating them with 12 Mysteries and Ideas/Formulascorresponding to the causal energies of each Sign of the Zodiac, by virtue of the fact that, according to the esoteric perspective, the Heart of Heaven is the Great Master of Masters.
“The sequence of the Mysteries which each of the signs of the Zodiac embodies will be clarified for us by the Christ, because the public consciousness today demands something more definite and spiritually real than modern astrology, or all the pseudo-occultism so widely extant.” (A.A. Bailey, The Reappearance of the Christ, p. 127).
2- Alice A. Bailey, Trattato dei 7 Raggi. Astrologia esoterica, pag. ing. 252
3- Ibidem, pag. ing. 255
4- Collezione Agni Yoga, Foglie del giardino di Morya. Appello § 421
5. Alice A. Bailey, From Bethlhem to Calvary, p. 5
6. Ibidem, Introduction
7. Ibidem, p. 157
8. Agni Yoga Series, Fiery World III § 445
9. Agni Yoga Series, Leaves of Morya’s Garden. Illumination § 103
10. Agni Yoga Series, Infinity I § 170
11. E. Savoyi, Rebuilding the Sanctuary of human life. Virgo