Today we celebrate the eleventh of the 12 Festivals of the new world Religion, the Full Moon of Scorpio, the festival aimed at asserting the Will to win in the name of Harmonythe sign of the Warrior (Disciple-Humanity), who fights his battle and emerges from it triumphant.

The battlefield is that of the three worlds (physical, psychic and spiritual) in which Mars, exoteric ruler (controlling the Personality) and esoteric ruler as well (affecting the development of the disciple) of Scorpio, acts powerfully; the battle breaks out when the orientation crisis occurs, in which spirit and matter “fight” to prevail.

Every form holds a life. Every life constantly reaches out after the similar life later in other forms. When spirit and matter sound the same note evolution will cease. When the note sounded by the form is stronger than that of Spirit, we have attraction between forms. When the note sounded by Spirit is stronger than that of matter and form, we have Spirit repelling form. Here we have the basis for the battlefield of lifeand its myriads of intermediate stages, which might be expressed as follows:

To the synchronization of the notes, or to the lack of synchronisation, may be attributed to all that occurs in the world cycles. Thus we have the production of harmony; first, the basic note of matter, then the note of Spirit gradually overcoming the lower note and usurping attention till gradually the note of Spirit overpowers all other notes.” (A Treatise on Cosmic Fire/275)

The battle of Scorpio, colored by the energy of the Fourth Ray, is the one in which the spirit tries to impose itself on the form:

“The fourth ray is essentially the refiner, the producer of perfection within the form, and the prime manipulator of the energies of God in such a way that the Temple of the Lord is indeed known in its true nature as that which “houses” the Light. […] This ray is expressive primarily on the first the formless planes, counting from below upwards, and its true purpose cannot emerge until the soul is awakened and consciousness is adequately recording the known. 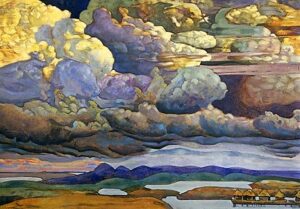 The battlefield in which the Warrior in Scorpio is engaged is made up of the succession of dualities that are gradually harmonised and explain why “Scorpio is both the Agent who deceives, and the Light of Liberation. The battle between the lower self and the higher self allows one to emerge triumphant, resurrecting in the Light. Deception and triumph, predominance of Maya or of the soul, war and peace, are the secrets of this sign, summarised by the two mottos.

At the Soul level Warrior I am and from the battle I emerge triumphant.

Maya is the illusion at the level of desires, the mirage of emotions that have their center in the personality, the stagnant water that prevents us from penetrating the darkness of matter in order to find its sacred mystery, its “immortal jewel”, the substantial identity with the Spirit.” (from TPS – Eighth zodiacal Sign: Scorpio)

Striving toward the future, be ready for battle. Do not hide your striving, for fire strives upward and only a high degree of striving will strengthen our union.” (Agni Yoga § 336)

This harmony through conflict between opposites, that follow one another at every conquest on a higher degree, is the great game between illusion and identification with fragments of Reality.

You will have noted how the career of the man has, therefore, proceeded from a crisis of duality to one of a relative unity, only to have that sense of unification disturbed by a renewed recognition of a higher and deeper duality. This duality temporarily produces another cleavage in a man’s life, and thus re-initiates a torturing process of bridging or of “occultly healing” this break in the continuity of the spiritual consciousness. I would here remind you that this sense of peace or perception of cleavage is in itself an illusion and of the nature of glamor, and is based upon the illusory sense of identification with that which is not the self, or soul. The entire problem can be solved if the shift of the consciousness is away from identification with the lower forms of experience into that of identification with the real and true man.

Stage by stage, the man has progressed from one state of illusion or glamor to another, from one point of discriminative opportunity to another until he has developed in himself three major capacities:

These capacities he developed by resolving the pairs of opposites on the physical, astral and lower mental planes. Now he faces his climaxing resolution, equipped with these powers. He becomes aware of those two great and apparently opposing entities (with both of whom he finds himself consciously identified)—the Angel of the Presence and the Dweller on the Threshold. Behind the Angel he dimly senses, not another duality, but a great Identity, a living Unity, which—for lack of a better word—we call the Presence. 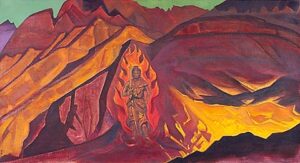 He then discovers that the way out in this case is not the method of handling force or of leaving behind both pairs of opposites, or of right recognition through the intuition, but that this Dweller and this Angel must be brought together; the lower entity must be “blotted out” in the “light”, or “forced to disappear within the radiance.” This is the task of the higher of the two entities, with which the disciple or the initiate, consciously and deliberately, identifies himself.” (Glamour: a World Problem/101-3)

The incompatibility between spirit and matter compresses itself like a rushing vortex. When the spirit is burdened by contacting imperfection through the shell, it begins a battle which discloses this imperfection. The shells that impede the spirit are like encumbrances obstructing the path. Truly, encumbrances! The cosmic creativity incessantly clears away striving toward darkness. Humanity’s chief lack, lack of understanding, lies in this expressed disharmony. When the spirit and the shells which clothe it will be in harmony, humanity will come closer to the cosmic union.” (Infinity II § 72)

Harmony is the perfect glory

Speaking of the highest harmony, it is said that Cosmos creates upon the principle of unity of life. Therefore, one may attain only through unity. Thus, the Infinite summons spirit and matter.” (Infinity II § 72)

The bridge between worlds is based on the harmonization of all the subtlest energies. Actually, the majority thinks that transmutation of the centers takes place on the physical plane. This is an error. Such consciousness must be enlightened. Transmutation of centers by Fire is a fusion of all the centers, both physical and spiritual. A spiritualization of the entire being takes place. In fiery transmutation the Fiery World is revealed especially strongly, because a fiery harmonization takes place in one’s entire essence, involving acquisition of all the higher tensions. Therefore, one may accept the law of the connection of the Worlds in each process of the refinement of spiritual centers. Accumulation of these energies gives the spirit an impetuousness which carves out the shortest path. Thus one must accept the concept of the bridge between Worlds, and one should remember that no labor unconscious of the centers exists. Conscious harmony of the centers is a great mystery. Thus, on the path to the Fiery World let us manifest understanding of the shortest path.” (Fiery World III § 117)

“It must never be forgotten that this fourth ray of conflict is the ray whose energies, rightly applied and understood, bring about harmony and at-one-ment. The result of this harmonizing activity is beauty, but it is a beauty that is achieved through struggle. This produces a livingness through death, a harmony through strife, a Union through diversity and adversity.” (Esoteric Psychology II/92)

“…harmony being one of the liberating forces which must precede the release of energy for use after initiation.” (Discipleship in the New Age I/58)

The Fourth Ray also operates in close connection with the Fourth Law (of Magnetic Control). It is the Ray of Harmony or Beauty—Harmony through control, that control entailing the knowledge of wisdom. It is the harmony of similarity; it is the equilibrising of all through the realisation of the laws of magnetism that produce the co-ordination of the many diverse into the one homogeneous; magnetism governs the synthesis of the many aspects into a form of unity.” (A Treatise on Cosmic Fire/585)

“Urusvati knows how emphatically We insist upon the need for harmony and unity. We often talk about unification, but now we wish to point out a special aspect of this concept—harmony. Only unification will produce the right results. It is true that any kind of unification will intensify energy. Even unity in evil can be effective, but it can never be harmonious, for evil by its very nature is disharmonious. Also, unity in evil cannot last, and its results will be vague. But goodness is always harmonious, and it alone can produce meaningful results.” (Supermundane II § 349)

“Urusvati knows that harmony in life refines human feelings. Indeed, harmony is the only thing necessary; with it all will be subtler and loftier. Harmony is a great concept! Yet people seek it in external conditions and overlook it in the essence of things.

[…] Do not fear the lofty concept of harmony. It can be applied in all aspects of life, and every human being can develop a sense of it within himself. This state can be called by different names, yet it is the property of all. Everyone sooner or later will achieve harmony if the art of thinking is cultivated. The thinker stressed correct thinking. He wanted His disciples to feel themselves to be artists who could create new kinds of harmony.” (Supermundane II § 341)

Constant readiness is a quality which needs to be developed. Readiness is not a nervous transport, it is not transitory tension. Reading is harmony of the centers, always open to perception and reaction. The man who is filled with it harmony is always receiving and always giving. His being is always strengthened by an uninterrupted current. There is no giving without receiving it. To break such a current is the death of advancement. The all-knowing one will also be all-giving. Let us understand this truth broadly, not setting limits by earthly conditions. A law exists according to which receiving it must not be construed as an accrual of personal property. Realization of such a concept can take place in the heart. No false assurances will deceive the heart. Strengthening of psychic energy produces firmness. Constant readiness is the product of a healthy psychic energy.” (AUM § 580)