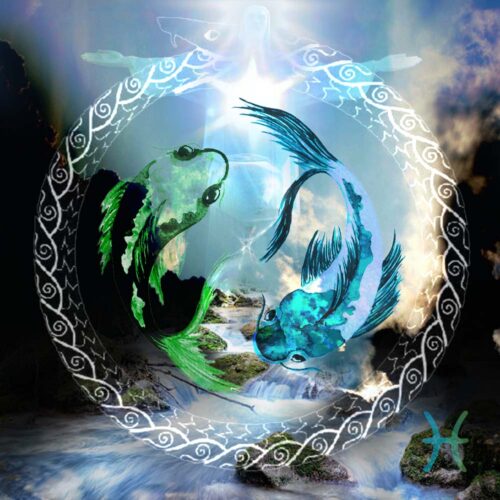 Today we celebrate the third of the 12 Festivals of the new world Religion, the Full Moon of Pisces – the festival aimed at asserting the Will to save in order to give freedom. [1]

“Pisces—Here, at the final stage, Pisces stands for the death of the personality and the release of the soul from captivity and its return into the task of the world saviour.” The great achievement is finished and the final death is undergone. “There is no more sea” says the ancient book, which means inevitably the “death of the fishes” and the release of the imprisoned life into new forms or new cycles of the divine Adventure.” (Alice A. Bailey, Esoteric Astrology, p. 121)

Today, on the day of the full moon, with the initiatory tension provided by Pisces, the transfiguring agent that conveys the 2nd and 6th Ray (Love/Wisdom, Communion), let us gracefully dream of the Future of the One Humanity and let’s carve with creative power and in beauty this new step of the twelve Festivities.

Sacrifice is the power of Love*

Let’s take advantage of these powerful energies of Love and Communion that radiate from the double sign of Pisces, working on transformation through sacrifice and thus progressing along the initiatory journey of humanity. Nothing can be achieved on the Illuminated Way without abandoning something, in the name of a Greater Good. Only in this way can the Spirit rise, step by step, on the great spiral. Only an act of Sacred Love can allow the One Humanity to advance. Sacrivice is the fulfillment of the sacred, and there can be no fulfillment without Love.

“Love, which is not emotion or sentiment, and which is not related to feeling (which is a distortion of true love), but is the fixed determination to do what is best for the whole of humanity, or for the group (if the larger concept is not possible to you), and to do this at any personal cost and by means of the uttermost sacrifice. Only those who truly love their fellowmen can see the issues clear and can grasp the inevitability of the things which must be done to end the present rule of terror and so usher in the new rule of peace.” (Alice A. Bailey, The Externalisation of the Hierarchy, p. 277)

“It is not possible to picture the revelation of the Love of the solar Logos as it reveals itself to the eye of the illuminated seer, nor to show the nature of the cosmic Lord of Sacrifice as He limits Himself in order to save. At each step along the Path, the extent of that love and sacrifice is opened up as the disciple knows himself to be in tiny measure also a Lord of Sacrifice and Love. It can only be appreciated as the two inner rows of egoic petals are unfolded; Knowledge would not reveal it, and it is only as a man transcends knowledge, and knows himself to be something non-separative, and inclusive that this particular revelation comes to him.” (Alice A. Bailey, A Treatise on Cosmic Fire, p. 1226)

“Having pervaded the worlds with a fraction of Myself, I remain”. Such is the theme of the soul’s endeavors, and such is the spirit which must underlie all creative work. In this thought lies the clue to the symbol of the Law of Sacrifice—a rosy cross with a bird flying over it. This is the loved cross (rose being the color of affection), with the bird (symbol of the soul) flying free in time and space.” (Alice A. Bailey, Esoteric Psychology II, p. 104)

“The aspects of self-sacrifice are so varied in human understanding that only the highest measurement must be used in everything. He who in self-sacrifice dedicates himself to Service is confirmed as the co-worker of Light. He who serves Cosmic Fire sacrifices himself. He who serves evolution is affirmed as a bearer of the law. He who serves, he who is devoted to the General Good, is confirmed as a co-worker of Cosmos. The creativeness of the centers reacts to all manifestations of the higher aspects of self-sacrifice. When the transmutation of Fire will enter life, it will be possible to say, “Verily, the Cosmic Ordinance is realized!”.” (Agni Yoga Series, Infinity II § 14)

“For both groups [Monads of love and activity] The “knowledge” petal is the first opened, owing to the inherent nature of the Manasadevas themselves, and their basic vibration. For all, sacrifice is the hardest, for it involves ever the two factors of intelligence and love,—intelligent knowledge and a love that goes out to that which must be saved through sacrifice.” (Alice A. Bailey, A Treatise on Cosmic Fire, p. 825)

“Achievement is ever followed by sacrifice and the giving of the greater for the lesser. This is an aspect of the Law of Evolution. Such is the note and theme of the entire creative process and is the basic meaning of the phrase, ‘God is Love’, for love signifies giving and sacrifice, at least in this solar system.” (Alice A. Bailey, The Externalisation of the Hierarchy, p. 166)

In this time of Sacrificethe center of Humanity as a planetary Discipleas a spirit that works with the power of lovewith a unified heart and in co-measurement with the celestial fires, can express the:

Will to save in order to give freedom

“Can Order be free? And Freedom be ordered?

The dilemma is solved only when the common Good is recognised: when the sacred union is established; when the illusory self is silent; when the sacrifice is made.

Order thrives on freedom, and true freedom is possible only through Order.”

“The more human beings evolve, the more they recognise freedom as a right, duty and supreme good. Of course it must be conquered and acquired by degrees, and the process of liberation is arduous, prolonged, demanding; However, it leaves everyone “free” to follow it in their own way, in other words to proportionate it, and even to reject it.

Freedom (from fear, ignorance, doubts, illusions) is that sovereign energy which, if applied with discipline, establishes Order without forcing, starts a true culture without deceiving, governs without subduing.

The Sun is the shining example of true power, the one that bestows freedom, step by step, according to program. It is the center of active Intelligence, that is, of Light.

True freedom is realised in the heart“.
(from unpublished writings by Enzio Savoini)

“It was the realisation of the urgency of man’s need to be delivered from his own desire-nature which led Christ to emphasize the necessity to seek the good of one’s neighbor in contra-distinction to one’s own good, and to advise the life of service and self-sacrifice, of self-forgetfulness and love of all beings. Only in this way can man’s mind and “the eye of the heart” be turned away from one’s own needs and satisfaction to the deeper demands of the race itself.” (Alice A. Bailey, Esoteric Psychology II, p. 155)

The Will to save in order to give freedom radiated by the sign of Pisces, through the esoteric ruler Pluto, anchors in the consciousness of the Disciple-Humanity:

the Mystery of Sacrifice

“He is a hero who acts self-sacrificingly, unwaveringly, consciously,

and who, acting in the name of the Common Good, 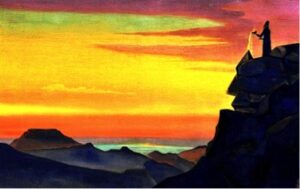 “Lost he is, and found; dead, yet vibrant with life.
The server becomes the saviour, and homeward turns.”

* Formula 1.7 of the Space Lambdoma

[1] In this year 6.1, the first of a septennium dedicated to the Idea of ​​a New World Religionwe intend to celebrate the dates of the full moonsthe sacred “doors” of alignment and synchronization between the three celestial symbols of manifestation, human (Sun/Soul, Earth/Personality, Moon/Bodies) and planetary (Planetary Hierarchy, Humanity, lower Kingdoms), associating them with 12 Mysteries and Ideas/Formulascorresponding to the causal energies of each Sign of the Zodiac, by virtue of the fact that, according to the esoteric perspective, the Heart of Heaven is the Great Master of Masters.

“The sequence of the Mysteries which each of the signs of the Zodiac embodies will be clarified for us by the Christ, because the public consciousness today demands something more definite and spiritually real than modern astrology, or all the pseudo-occultism so widely extant.” (A.A. Bailey, The Reappearance of the Christ, p. 127).