Today we celebrate the tenth of the 12 Festivals of the new world Religion, the Full Moon of Libra, the festival aimed at asserting the Will to balance Spirit and Matterconnected to the Mystery of the Law, the enactment of Order. [1]

In co-measurement with the celestial Fires, ideally united with all those who in every time and in every place work for the Common Good, as a planetary Disciple – One Humanity, we carve the tenth step, guided and illuminated by the energies of Libra , which expresses, in the current precession cycle, the pure 3rd Ray, creative Intelligence.

Interlude, balance between opposites, justice, law, are the fundamental notes of Libra, whose ascending motto reads: “I choose the way which leads between the two great lines of force”.

[…] Libra is one of the four arms of the Cardinal Cross. […] The significance of the energies working out into our solar system through the medium of the four arms of this Cross, or from the four constellations, Aries, Cancer, Libra and Capricorn, can be summed up in the four words: Creation, Manifestation, Legislation and Initiation. […]

For the sign we are considering […] they mean again the working out of the plan under spiritual and natural law which is evolutionary in expression; This is the goal of evolution and its expression and is steadily revealing the nature of God, for the laws under which this solar system of ours is governed are expressions of God’s quality and character. This is Legislation, or Libra in activity. […]

Libra is an air sign, together with Gemini (Mutable Cross) and Aquarius (Fixed Cross): these three signs are pre-eminently signs of the Mind of God as it expresses itself through man; The lower mind dominates at first, causing the recognition of the Self and the Not-Self, or the essential dualism which underlies all manifestations [Gemini]; The higher mind, however, steadily increases its power and control, producing the balancing of the pairs of opposites through the illumination which it brings to the lower mind [Libra]and then the Soul, the eternal Son of Mind, becomes the ultimate synthesis, focussing and relating the universal mind [Aquarius] to the two lower aspects of the Mind of God. [2]

The first words of the Rite of Libra contained in the Book of Rituals indicate the essence of the idea of ​​a choice made with justice:

The right choice is made by staying at the Center and from the Centre, where one cannot err.

The gaze goes to the future, it questions and invokes.

The ways going from here to there vanish, bright the middle way appears, golden, infinite, on which all places can be reached without motion. 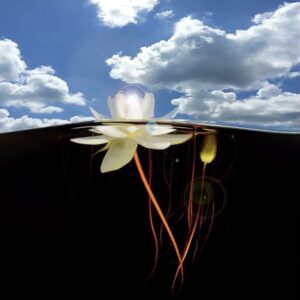 Today, in this Full Moon in which we are immersed into the causal Energies of the Sign of the September Equinox, let us imprint in Space

The Will to balance Spirit and Matter

Here’s a couple of extracts that masterfully summarise the concept:

In relation to the human unit, the secret of liberation lies in the balancing of the forces and the equilibrising of the pairs of opposites. The Path is the narrow line between these pairs which the aspirant finds and treads, turning neither to the right nor to the left.

It must be remembered always that when the pairs of opposites are discerned, when a man balances the forces of his own nature, when he has found the Path and become the Path, then he can work with the world forces, can preserve the balance and the equilibrium of the energies of the three worlds and so become a co-worker with the Masters of the Wisdom. [3]

The assimilation of the higher energies, upon the evidence of tension, can give form to new energies. Matter and spirit grow through mutual help. When the tensed current of will flows with accelerated speed, matter is absorbed by the spirit and the functions of a spiritual creator are performed. Then the refining of forms takes place. The power of the fire of spirit is like the power of the fire that melts metals. […] That spirit who years to bring his energy into incandescence becomes the melter of matter. What forms and dimensions the spirit can melt, from all the spatial matter and from our lives! [4]

We feel in ourselves a profound demand for justice, of which Libra is the heavenly correspondence, which progressively pushes us to make evolutionary choices, and these are always a harbinger of innovation and refinement of the formal aspect. The consciousness or relationship between spirit and matter thus realizes conditions of equilibrium that are always dynamic, temporary and ordered agreements of energies that are the result of ever broader understandings and visions: we intuit the union between Spirit and Matter, as a union of the Origins and of the Universe; On the basis of the only contingently possible choice, one experiences some perception of the eternal Unity of the Whole. 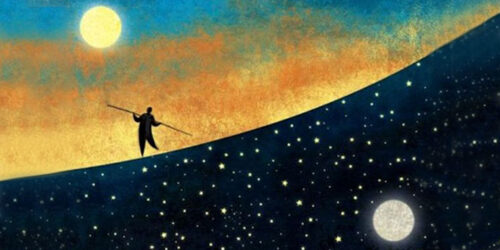 Uranus, which expresses the Seventh Ray, of Order and Ceremonial Magic, is the esoteric ruler of Libra: he is a master in the work of materialisation of what must be manifested, bringing together spirit and matter, a master in the work of energetic refinement , an unifying occult consciousness that transmutes the lower principle by drawing it powerfully towards the higher. [5]

It is precisely Uranus that connects Libra to the opposite Sign, Aries – of which He is hierarchical Ruler – and to Aquarius – of which He is exoteric ruler – the Sign of the New Culture and Civilization that will be founded on brotherhood.

When the Libran has assimilated the soft harmonies of Venus, he begins to respond to another vibration, that of Uranus. The statement in the Bible which describes this impulse is expressed in the words, “Behold, I make all things new.” […] [6]

Mystery of the Law

The Law is the enactment of Order [7]

These words are illustrated as follows by the Author himself:

Libra is rich and generous with gifts. Its seventh quality bestows the Rule of Art, another way of saying divine Law, which it is possible and dutiful to pursue in all daily practical activities.

This last concept expresses the truth that Formulas (inner entities) cause, build and govern Forms (outer entities), and that the reverse path must therefore also be accessible, the one, in other words, that goes back from these to those. And this sentence demonstrates, in another way, the function of ritual and rituality, which express the Law in everything. [8]

Here is an accurate definition of the essence of the law:

[…] A law presupposes a superior being who, gifted with purpose, and aided by intelligence, is so coordinating his forces that a plan is being sequentially and steadily matured. […] When, through contact with his own higher self, he participates in the knowledge of the objective, and when through climbing the mountain of vision his perspective changes and his horizon enlargements, he comes to the realisation that a law is but the spiritual impulse, incentive and life manifestation of that Being in which he lives and moves. […] He then himself begins to wield the law or to pass wisely, lovingly and intelligently through himself as much of that spiritual life impulse which his particular organism can respond to, transmit and utilise. […] [9]

The symbol of Libra itself, the scales, actually derives from the symbol of the Law of Polar Union: two balls of fire united by a triangle of fire, thus picturing the triple interplay between all atomic structures. [10]

Many legal statutes have been invented by humanity, but the most immutable has not been pronounced—that of cosmic right. It is easily seen how often this law is applied and how it guides life. […] In conformity with this immutable law it is possible to pass over the most dangerous abyss. Such full authority may be called Hierarchic, but when we add to this the chemism of the luminaries and the delineations of the far-off Worlds, it is then possible to define such a right as cosmic. [11]

We should consider that it is through the Seventh Ray that the supreme Order of Creation is hierarchically composed into septenary orders of Consciousnesses, Energies and Substances.

A passage from Agni Yoga warns us: […] Do not write laws upon a dead parchment, which may be carried off by the first thief who comes along. Bear the laws in spirit, and the breath of the Good will bring you before the wheel of the law and ease your path. […] [12] 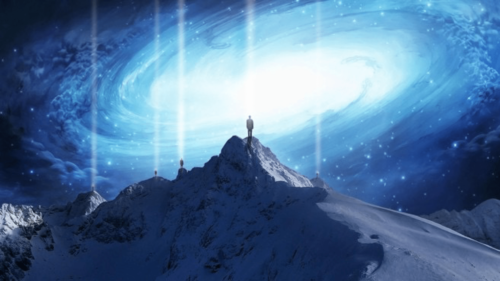 It is a loving call to all of us, to spur us on to take responsibility for helping to create a new culture founded on spiritual values, focusing on the intuitive plane, and a future order interwoven with freedom.

Let’s once again consider how the seventh Ray which pervades Libra through its esoteric ruler, Uranus, plays a decisive role in the creative virtue and the construction of powerfully radiant thought-forms, inspired by the World of Ideas, and how it has been offered to us – like a magical gift – the ability to choose to live according to the celestial Laws and rhythms, that is to say ritually.

The Fiery Servitors can affirm new principles. […]. The manifestation of the law of Cosmic Right sets forth the origin of the New Epoch, the Epoch of Equilibrium, and of Beauty of Existence. A striving for the creation of great new formulas will give to humanity a wonderful new step. [13]

Let us conclude with a vision:

[…] The sign for the Aquarian Age is that of a man, carrying on his shoulders a jar of water so full that it pours over to all and sundry, and yet it diminishes not. The sign for this Law of Service is very similar, but the difference lies in this; that the man stands, perfectly balanced in the form of a cross, with arms stretched out and with the water pot upon his head. In this difference there lies much of real significance. The jar of water, posed upon the shoulders, is a sign of the burden of service. It is not easy to serve. […] The man with the water jar upon his head indicates to us poise, equilibrium and balance. For this balance, the understanding of the Law of Magnetic Impulse has prepared him. That is the Law of Polar Union and its symbol is the originator of the zodiacal sign for the constellation Libra—balance and service. These are the two expressions of Divinity which are, today, man’s next great objective. […] [14]

[1] In this year 6.1, the first of a septennium dedicated to the Idea of ​​a New World Religionwe intend to celebrate the dates of the full moons, the sacred “doors” of alignment and synchronization between the three celestial symbols of manifestation, human (Sun/Soul, Earth/Personality, Moon/Bodies) and planetary (Planetary Hierarchy, Humanity , lower kingdoms), associating them with 12 Mysteries and Ideas/Formulas, corresponding to the causal energies of each Sign of the Zodiac, by virtue of the fact that, according to the esoteric perspective, the Heart of Heaven is the Great Master of Masters.
“The sequence of the Mysteries which each of the signs of the Zodiac embodies will be clarified for us by the Christ, because the public consciousness today demands something more definite and spiritually real than modern astrology, or all the pseudo-occultism so widely extant. ” (A.A. Bailey, The Reappearance of the Christ, p. 127).
[2] Alice A. Bailey, Esoteric Astrologypp. 239-242
[3] Alice A. Bailey, A Treatise on White Magic, p. 225
[4] Agni Yoga Series, Infinity I § 42
[5] The ceremonial ray has been often called “the marriage ritual of the Son”, because upon this ray Spirit and matter can meet and have union. (Alice A. Bailey, A Treatise on Cosmic Fire, p. 909)
[6] Alice A. BaileyThe Labors of Hercules, p. 64
[7] [Formula 1.5 of the Order Lambdoma
[8] Primo Vertice, The solar System in space (available only in Italian)
[9] Alice A. Bailey, A Treatise on White Magic, p. 11-12
[10] Alice A. Bailey, A Treatise on Cosmic Fire, p. 1220
[11] Agni Yoga SeriesFiery World II § 454
[12] Agni Yoga Series, Leaves of Morya’s Garden II § 233
[13] Agni Yoga Series, Fiery World III § 162
[14] Alice A. Bailey, Esoteric Psychology II, p. 120