Vega-C, the newest iteration of the European Vega rocket, is being readied for its debut flight, VV21. Vega-C boasts a higher payload capacity and lower cost per kilogram of payload than the original Vega rocket.

As part of its first mission, the vehicle will carry seven payloads from several European nations to a 6,000 km medium Earth orbit (MEO). VV21 is set to lift off from pad ELA-1 in Kourou, French Guiana at 8:13 AM local time (11:13 UTC) on July 13.

Vega-C (Vega Consolidation) marks a significant upgrade over Vega, with most parts of the vehicle being enhanced or swapped out entirely. Its development was spearheaded by lead contractor Avio, who also headed the original Vega program.

The European Space Agency (ESA) will be managing the initial flights of Vega-C, before handing over the responsibility to Arianespace later on.

The journey of #VegaC towards its maiden flight continues: a few days ago, its solid propellant motor P120C was activated and transferred from Regulus to @EuropeSpacePort EUP/K facilities ahead of flight #VV21 (#VVC1) pic.twitter.com/T0oxgrYGEL

The first stage of Vega-C is the P120C solid rocket motor. This new stage is larger than Vega’s P80 first stage – with almost twice the propellant capacity – giving the vehicle higher performance. P120C motors will also be utilized as side boosters on the upcoming Ariane 6 heavy-lift launcher, available in sets of two or four. This commonality will simplify the production of both solid-propellant vehicles, as well as reduce their cost.

An extended version of the P120C, the P120C+, will be available on future Vega-C and Ariane 6 launchers. It is one meter longer than the standard P120C and features 14 tons of extra propellant.

The P120C will burn for just under two and a half minutes before separating. The Z40 second stage will then ignite for its two-minute burn.

The Z40 stage – short for Zefiro 40 – is also larger than the Z23 second stage of Vega. It features around 10 tons of additional propellant over its predecessor. Four minutes and 35 seconds after liftoff, it will burn out and separate. The third stage will ignite seven seconds later, with the fairing separating four seconds after ignition.

The third stage of Vega-C is the Z9 motor – unchanged from Vega. It features 10 tons of propellants and is the final solid-fuel stage of Vega-C. It will conduct its burn and then separate from the rest of the rocket seven minutes and 22 seconds after liftoff.

The Z9 third stage of Vega-C is lifted into place above the second stage ahead of the VV21 mission. (Credit: ESA)

The fourth and final stage of Vega-C is the Attitude Vernier Upper Module+ (AVUM+), an upgraded version of the AVUM flown on Vega. It features additional propellant and less structural mass, contributing to the payload increase of the new rocket. AVUM+ features a re-ignitable liquid-fueled engine, allowing the stage to deploy payloads into different orbits.

AVUM+ will be five burns of its engine on the VV21 mission.

In addition to changes on the rocket stages, the payload fairing has been enlarged over that of Vega, providing additional volume for payloads. It stands over nine meters tall and three meters in diameter.

Seven satellites will be onboard Vega-C for its maiden flight. They will be traveling into a circular orbit nearly 6,000km above Earth’s surface, inclined 70 degrees to the equator.

The largest payload is the nearly 300kg LAser RElativity Satellite-2 (LARES-2), built by the National Institute for Nuclear Physics in Italy. It will be operated by ASI, the Italian space agency, and will be around one hour and 24 minutes after liftoff, following two burns of AVUM+.

LARES-2 is a passive satellite, meaning it features no instruments of its own. Instead, it resembles a 42 cm-diameter sphere, covered in small reflectors. Ground stations will precisely measure its orbit to further understand the frame-dragging effect, where a large rotating object like a planet – in this case, Earth – slightly distorts spacetime. Its predecessor, LARES, was launched in 2012 on the first Vega rocket. 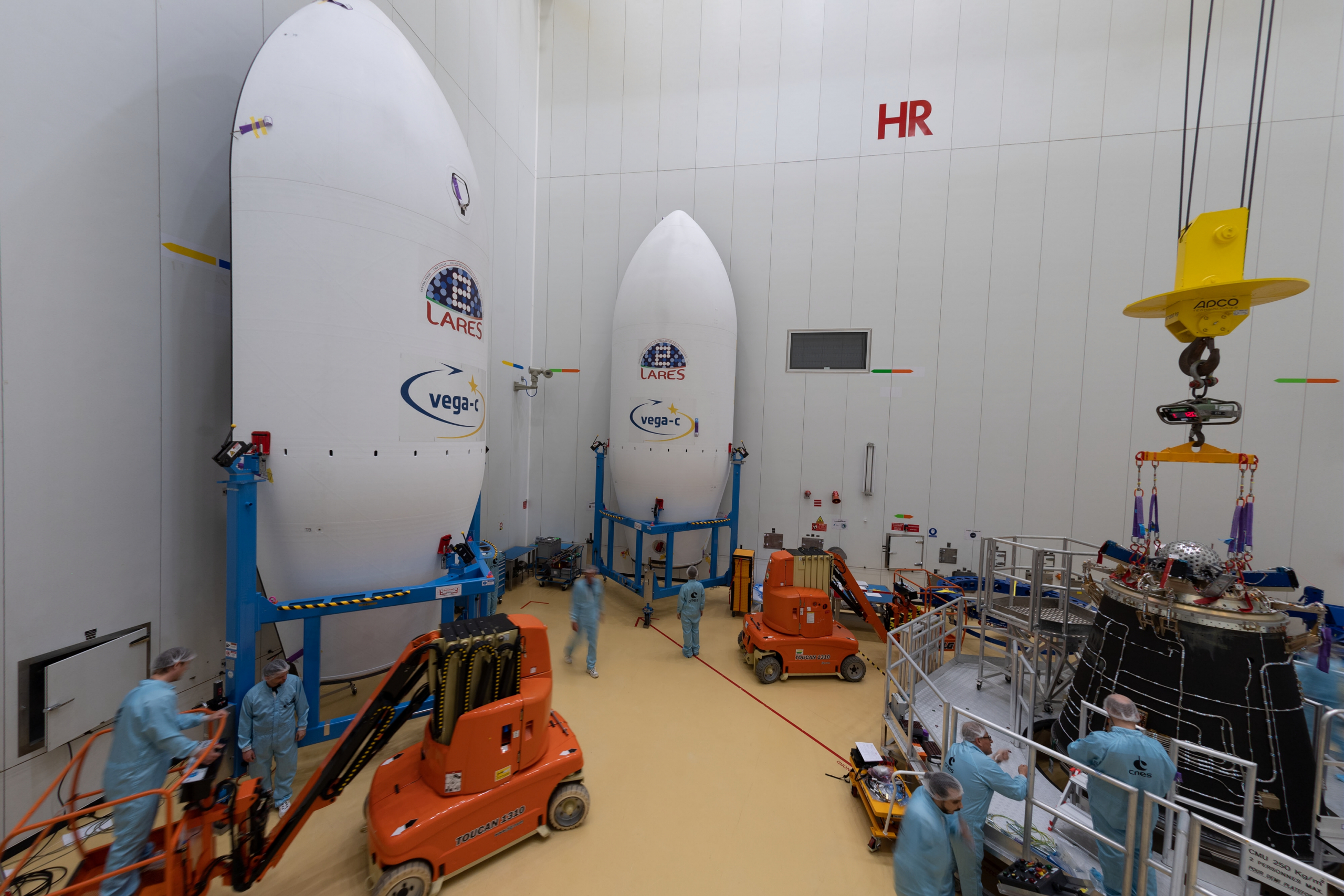 The payloads of VV21 preparing to be encapsulated in the fairing. LARES-2, the metal sphere, can be seen on top of the payload stack on the right. (Credit: ESA/Manuel Pedoussaut)

Six CubeSats are also making the journey and will be ejected after LARES-2 separates. Many of the CubeSat missions focus on the radiation environment of this unique orbit, as they will reside in the inner Van Allen radiation belt.

Alpha, a 1U CubeSat, will make use of its 6,000 km orbit and perform research into Earth’s magnetic field. The project is led by ARCA Dynamics in Italy.

CELESTA (CERN Latch-up Experiment Student Satellite) is a 1U CubeSat being led by CERN (European Organization for Nuclear Research) and France’s University of Montpellier. This satellite will also be used to monitor the radiation environment in orbit.

MTCube-2 is a student-led CubeSat, also from the University of Montpellier. This will investigate the effects of radiation on flash memory, specifically the rate of errors. In-space radiation is notoriously damaging to computer storage, and spacecraft require resilient and hardened systems.

Trisat-R will measure the ionizing radiation in its orbit, in terms of total dose as well as the intensity of individual spikes of radiation. It is being launched for the University of Maribor in Slovenia.

Greencube is a 3U CubeSat, testing new methods of growing vegetables in space. It features a small pressurized garden, intended to maximize the efficiency of the resources needed to grow plants in space. Greencube is being developed by the Sapienza University of Rome.

Finally, AstroBio CubeSat (ABCS) will demonstrate in-space autonomous biolabs. Also a 3U CubeSat, ABCS will test chemical mixing and observe the results – which include light emissions from chemical reactions.

Following the deployment of all payloads, AVUM+ will perform a fifth and final burn to put itself into a graveyard orbit. 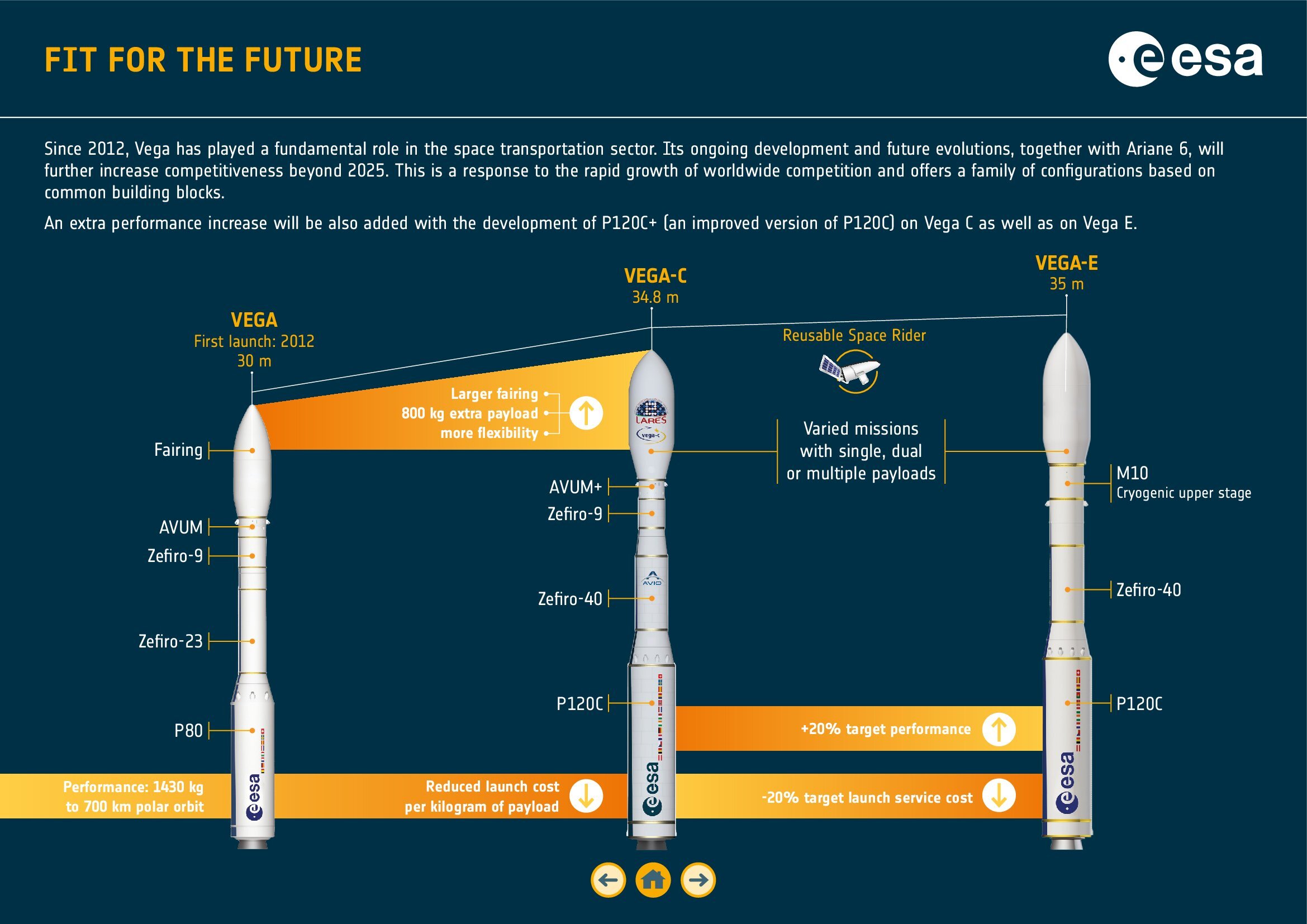 While it is the newest vehicle, Vega-C is not planned to be the end of upgrades on the Vega platform.

Vega-E (Vega Evolution) will be the next major upgrade to the series. Currently expected to debut in 2026, Vega-E will see the Z9 and AVUM stages replaced by a new liquid methane/liquid oxygen third stage – while retaining the same first and second stages. This stage would be powered by the new M10 engine, which runs on an expander cycle.

Looking in the near term, Vega-C is set to launch up to five additional missions in 2022 after VV21. In 2023, the vehicle will launch the first demonstration mission of Space Rider, a reusable lifting-body spacecraft that will enable experiments to fly into space and be recovered.

(Lead image: Vega-C inside the assembly facility before liftoff on the VV21 mission. Credit: ESA/M. Pedoussaut)