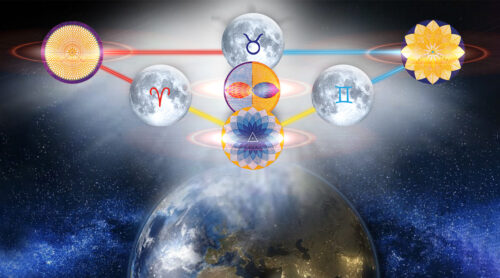 Today, April 12, 2022on the day of the great geocentric conjunction between Jupiter and Neptune in Piscesgiven the exceptional nature of the current signs of Heaven and Earth, the New Group of World Servers units their forces to invoke and evoke the saving force [1]aligning itself “with a united breath and an unified rhythm” with some primary dates and Directions:

About the 3 full moons:

There will be three such major festivals each year, concentrated in three consecutive months, and therefore leading to a prolonged spiritual effort which will affect the remainder of the year. These will be:

1. The Festival of Easter [ARIES]. This is the festival of the rose, living Christ, the Teacher of all men and the Head of the Spiritual Hierarchy. He is the Expression of the Love of God. On this day the Spiritual Hierarchy which He guides and directs will be recognised, and the nature of God’s love will be emphasized. This festival is determined always by the date of the first Full Moon of spring, and is the great Western and Christian festival.

2. The Festival of Wesak [TAURUS]. This is the festival of the Buddha, the spiritual Intermediary between the highest spiritual centre, Shamballa, and the Hierarchy. The Buddha is the Expression of the Wisdom of God, the Embodiment of Light, and the Indicator of the divine Purpose. This will be fixed annually in relation to the Full Moon of May, as is at present the case. It is the great Eastern festival.

3. The Festival of Goodwill [GEMINI]. This will be the festival of the spirit of humanity—aspiring towards God, seeking conformity with the Will of God and dedicated to the expression of right human relation. This will be fixed annually in relation to the Full Moon of June. It will be a day whereon the spiritual and divine nature of mankind will be recognised. On this festival, for two thousand years, the Christ has represented humanity and has stood before the Hierarchy and in the sight of Shamballa as the God- Man, the Leader of His people and “the Eldest in a great family of brothers” (Romans VIII:29). Each year at that time He has preached the last sermon of the Buddha before the assembled Hierarchy. This will therefore be a festival of deep invocation and appeal, of a basic aspiration towards fellowship, of human and spiritual unity, and will represent the effect in the human consciousness of the work of the Buddha and of the Christ.

These three festivals are already being kept throughout the world, though they are not as yet related to each other, and as part of the unified spiritual Approach of humanity. The time is coming when all three festivals will be kept simultaneously throughout the world, and by their means a great spiritual unity will be achieved and the effects of the great Approach so close to us at this time will be stabilized by the united invocation of humanity throughout the planet.(A.A. Bailey, The Externalization of the Hierarchy, p. 402, 420-1).

To assist the descent of the saving force on these 3 Dates it is therefore proposed to assert the relative Wills of the 3 Signs (See The 12 Festivals of the New World Religion):

May the One Humanity realize its Destiny:
Freedom, Enlightenment, Brotherhood!

It is the Festival of Light for the New Group of World Servers:

From chaos to Beauty: everything is Light! 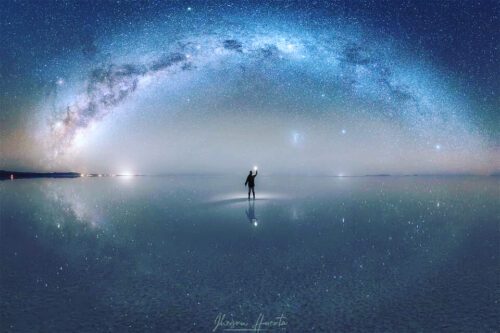 “The understanding of Beauty will save the world.”

In the Heavens, the two great mothers, Jupiter and Neptunefrom the very deep Waters of Pisces graft into the depths of consciousness that seed of saving force which will strip off its material bark in order to progressively reveal to the Hearts the solar Christthe Truth of right systemic relationshipsof Unity in Father, in Spirit. 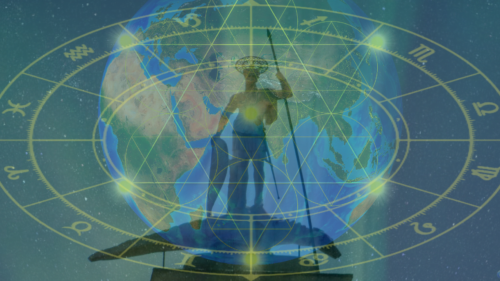 [1] “…goodwill is the”saving force“and an expression of the will-to-good which animates the New Group of World Servers.” (A.A. Bailey,DISCIPLESHIP IN THE NEW AGE Vol. Ip 784

“…a free flow and right energy relations between the three major centers in our planet which correspond to the head, heart and throat centers in man [Shamballa, Hierarchy and Humanity] … This circulation, which for the first time in planetary history includes the highest centre, Shamballa, is not yet completely established. Shamballa has been in touch with the center called Humanity by impact several times in the history of the race. But there has been no reciprocal action and no free flow. Humanity has taken the impact of energy and this impact has wrought changes in the activity of the centre, but there has been no “responsive return,” as it is esoterically called, and hence no circulation. The Shamballa force has hitherto been transmitted via the Hierarchy. For the first time, and in this century there has been direct impact. The following diagram may make this clearer.
We shall eventually have a free circulation and a veritable vortex of force set up between the three centres; it will be of such an increasing radiatory activity that—moving in both directions around the three centers—it will eventually contact the radiations emanating from the other four centers of the planetary life, thus the interplay and the interrelation between all seven. … 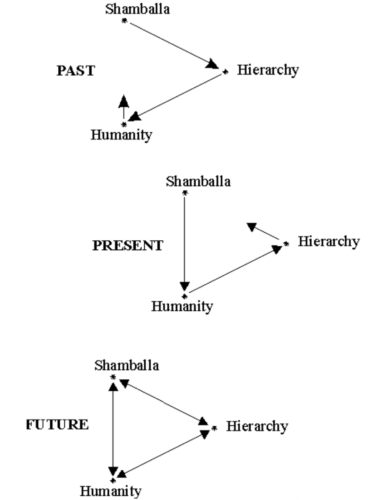 The importance, therefore, of the center which we call Humanity will be apparent. The Secret Doctrine has ever taught that mankind has a special function in saving and regenerating nature. The “saving force”—a circulatory combination of the three major energies—is radiated by humanity as a group-creative impulse, and this gradually sweeps into all forms of life the field of its magnetic potency, thus relating them (or rather the soul of each kingdom) to the Hierarchy and to Shamballa.” (A.A. Bailey, Rays and InitiationsLucis Collection, p 159-160)

“The hour of service of the saving force has now arrived … This synthesis of the three energies, evoked through invocation and the response of certain divine potencies, is esoterically given the name of “the saving Force.” Of its exact nature and intended effects we know practically nothing. It has never before appeared in action on the physical plane, though it has been for some time active upon the mental plane. Though it is a blend of the energies of the three centers referred to above, it is primarily the energy of the divine Will, which will be its outstanding characteristic.(The Externalization of the Hierarchy, p. 571 & 275)

[2] At the heliocentric level; while geocentrically it will be May 9, 2022, January 10 and February 5, 2023) – see in Year 2022 – 2nd quadrant and solstice article. Taurus-Scorpio is the zodiacal equator: pure 4th Ray; Taurus is the Eye of Revelationand rules the New Group of world serversthe planetary Ajna Center (The Shamballa Head Center is ruled by Aries, the Hierarchy Heart Center by Aquarius and the Humanity Throat Center by Pisces).