The European Service Module (ESM) is part of the necessary hardware to bring people back to the moon. It will not only be used to power Orion on the Artemis I mission, but on the missions to come as well.

He explained that from a technical standpoint, the ESM-3 in the clean room is in the so called “integration phase.” This means that the engineers at Airbus are integrating hardware, for example tubing and harnesses, into the service module. Next up would be the installation of the main tanks, which would then block the access to all the wires and cables. This makes the installation and testing of these components necessary before full integration of the tanks.

While all of this is ongoing, they are also performing integration tests on ESM-3. Gronowski outlined the test flow as follows:

“It starts like you would do when building a house. You put your structure, cable, and your electrical connection in, and of course you check your harness. Then there is a next step: We are putting in all the actuatoric, sensoric, and electronic boxes.”

“And then, step by step, you do integration tests of these electronic boxes up to a point where, finally, we have fully functional tests running. We have an initial ‘power on’ on the ESM, so we can check if we have full power in the complete system, and then we are moving into the biggest test. In this test, we are running a pressure test on the propulsion subsystem.”

“We simulate basically the firing of an engine,” he continued. “We pressurize our propellant tanks to the right level of pressure of 400 bar. This requires a partial closure of the facility during the test and is a very interesting test because it shows the full functionality of the entire propulsion subsystem.”

Regarding ESM-1, Gronowski explained that on the hardware side, Airbus is not involved anymore after the initial handover to NASA, however they are involved in the preparation to flight. They will have experts in a dedicated technical control room during the flight and will be able to monitor the health and status of the ESM. This is the case for launch, as well as any potential wet dress rehearsals (WDR).

For ESM-2, he updated that the module is fully integrated and connected to the Crew Module Adapter, and Airbus supports Orion’s prime contractor, Lockheed Martin, in running dedicated tests on the integration. The day before the interview, the Test Readiness Review took place regarding the ESM-2. 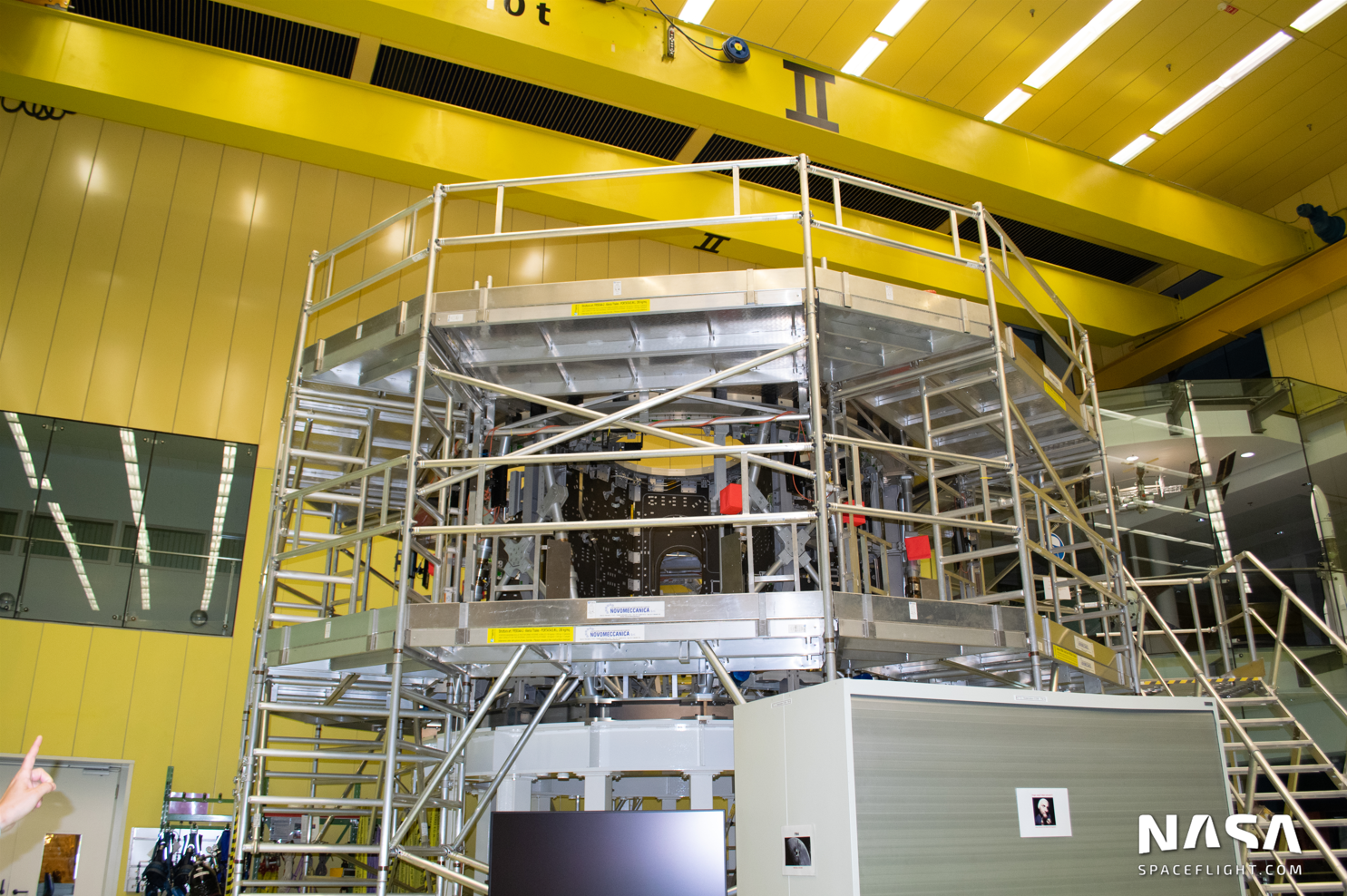 ESM-4 in the arrival stage at Airbus Bremen. Credit: Adrian Beil for NSF

NASASpaceflight also asked Gronowski regarding potential changes in the upcoming modules, including the running out of AJ-10 engines for the ESM. He replied:

“I would say, regarding the big picture, there will not be a big change. We are facing some obsolescence in some components which we have to address in future vehicles. One particular example is the main engine thrust vector control and actuator.”

“This hardware is not available anymore. That needs to be exchanged. From ESM-3, we will fly different hardware there. In the future, there will be the most significant change.”

“NASA is now running out of the main engines,” he added. “We have up to six engines available, and from ESM-7 onwards, we need to have a new different engine, and that’s what NASA is working on.”

“For the time being, our assumption is that this engine is a close replica. I’m not saying it’s completely identical, but it’s kind of a close replica from what already flew on the shuttle. That means for us the impact should not be big. If it will be a completely different engine, of course we will address that, but for now that is not the case.”

Gronowski also included that there will probably be no big change to the performance of the successor of the AJ-10 on the ESM, as the ESM is, to a certain degree, designed around these heritage AJ-10 engines. This includes loads requirement, cooling requirements, and more. A drastic change in the engine would mean a more drastic change in the ESM. 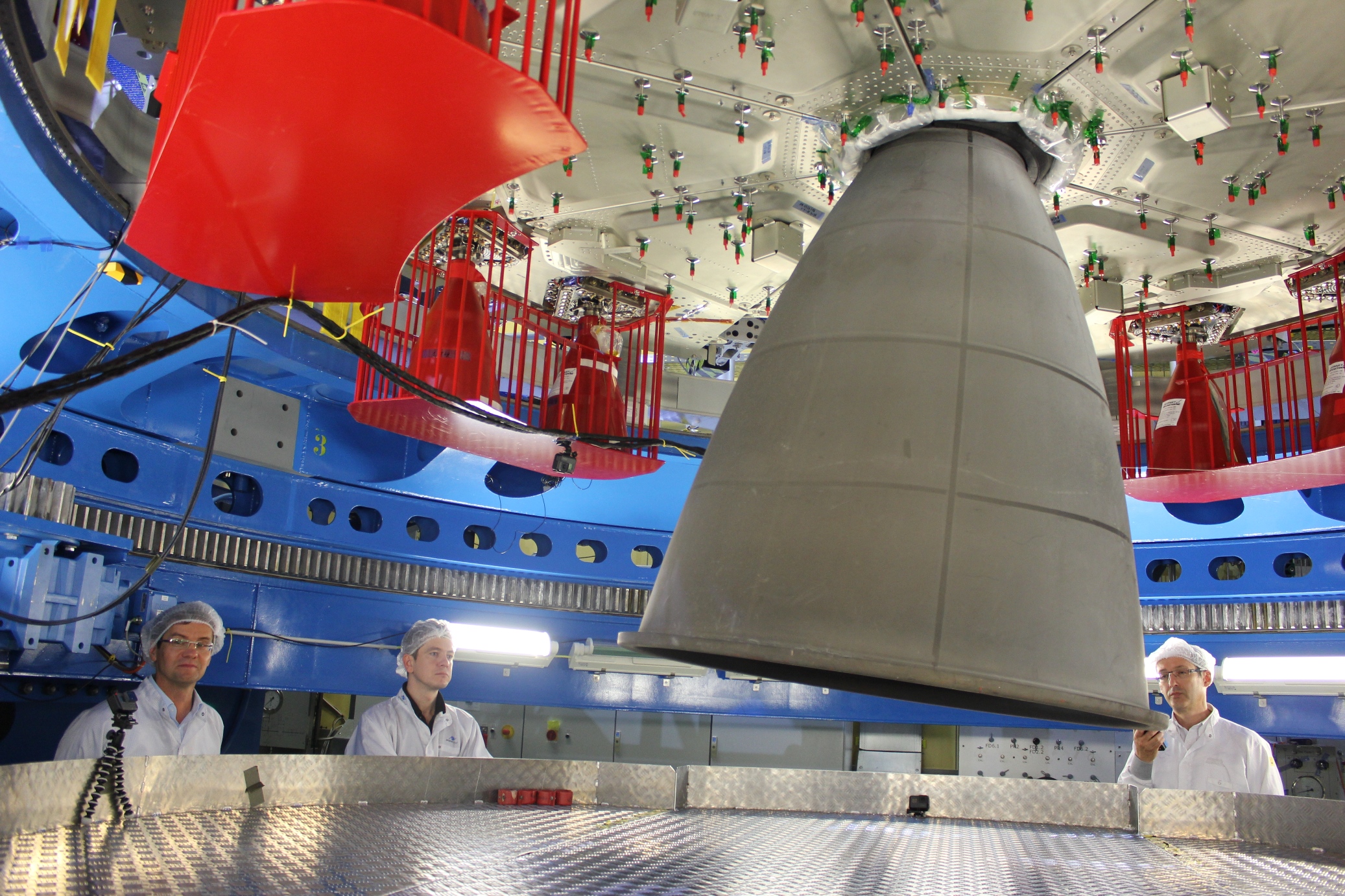 Airbus also received the AJ-10s in a refurbished state after NASA performed delta qualification on them–to be sure they are still in a good state after their heritage flight on the shuttle. NASA supported Airbus in the integration and installation of the engine in Bremen.

Regarding the change from the Interim Cryogenic Propulsion Stage (ICPS) used for the first three SLS launches to the Exploration Upper Stage (EUS) on later SLS missions, he does not think it will impact the ESM a lot. There are some small changes they still have to address in terms of loads on the vehicle, but the initial big concerns regarding the change of the upper stage turned out to be minor.

So far, no design change to the primary structure was performed because of the EUS. There were some small adaptations on the solar array wings.

With potential delays to future Artemis flights, Gronowski outlined some potential life-limited items. As of right now, they can take care of these items, qualify them for longer use periods, and test them. Regarding the Artemis I mission, there is no item that currently makes them nervous in terms of qualification.

Regarding the longer mission time of Artemis I being around 40 days, he said that the ESM can sustain longer periods of times than the required 21 days with a crew onboard. This comes down to the fact that the ESM in design has its heritage as a multipurpose vehicle, and only in later design reviews with NASA, they outlined that they would not need long-term vehicles for now—hence the requirements for long-term leaving the design of Airbus and ESA–but the core that is allowed for longer duration is still in the design of the vehicle. 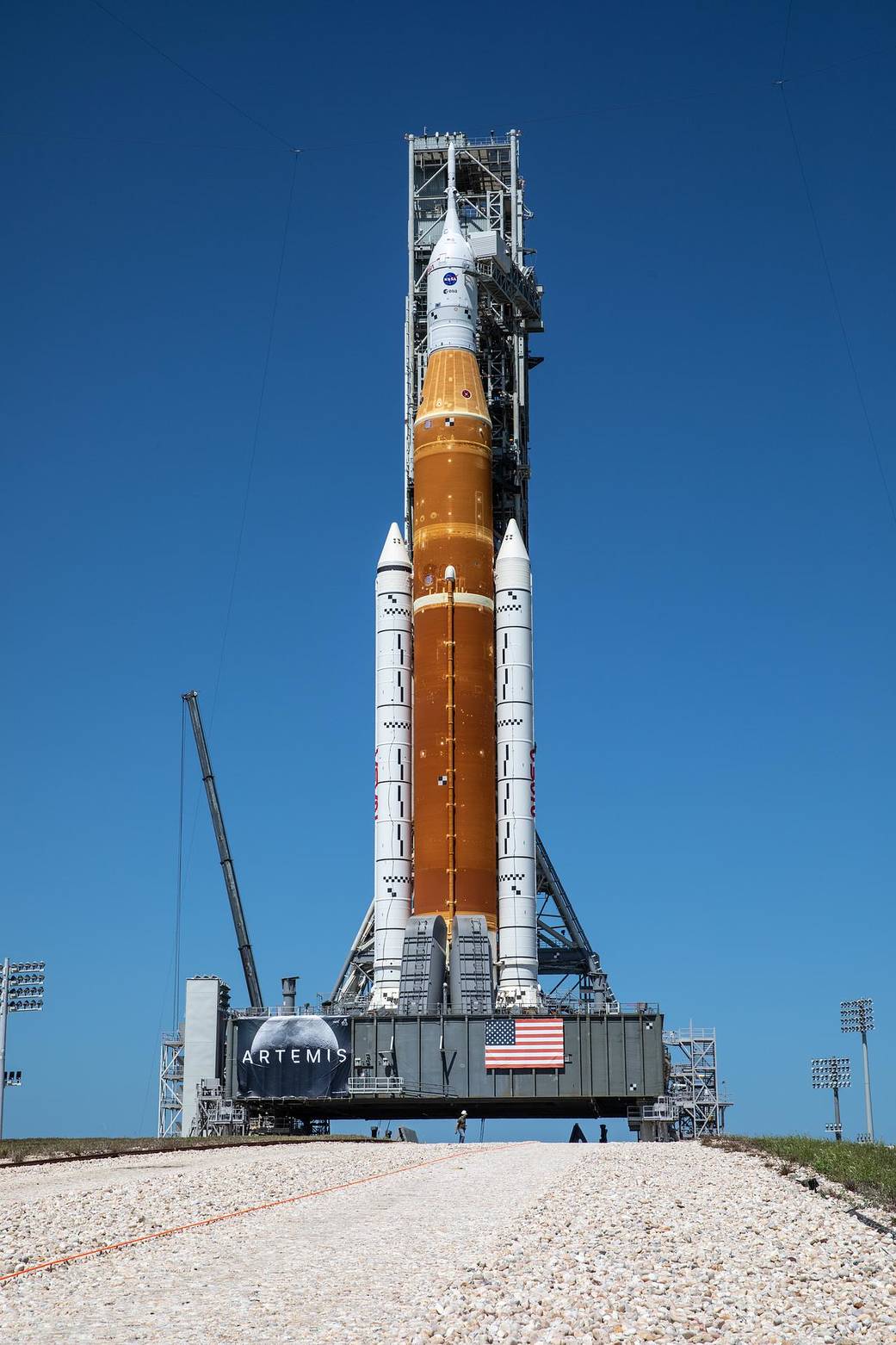 SLS rolling out for the Artemis I launch. Later flights will replace the smaller ICPS with the bigger EUS. Credit: NASA.

About potential missions to Mars, and the increased lifetime needed for that, Gronowski said they are discussing an extension of the ESM’s capabilities. This not only includes trips to the red planet but also extended stays at the gateway and other destinations. NASA opened the discussion again to extend the mission certification, which Airbus can agree with.

Regarding whether it would matter to them if Orion would require a dock to a lander or gateway, he again hinted at the ESM’s origins as a multipurpose vehicle, saying:

“There’s maybe a chance that we will have to dock with the lander or with the gateway. That is no problem for us, no difference.”

“That’s [the] reason why I always say the set of requirements we see from NASA was clearly written as a kind of multi-purpose vehicle. We never knew exactly what type of mission NASA would fly, so even today we know what is happening on this one (Regarding Artemis I). If there is any issue regarding certification or qualification with future missions, NASA knows they can ask us, so we check on hardware capabilities.”

Gronowski will be in the USA for the Artemis I mission. At the beginning, he will assist the mission from the KSC, then he will later move to the Johnson Space Center to support the later parts of the mission.