5.7 Rule: The Rule is the building canon of the work

7.5 Work: The Work is the masterpiece of Creation

5.7 Rule: The Rule is the building canon of the Work

“Everything is rule and co-measurement in the World [of Ideas, editor’s note] where the Rule of Art reigns; Nothing happens there without proportion and exactness is the norm, and it is the Light, not the exception. Everything is guided and governed by Number, even joy and bliss. Therefore everything glows and shines through, and the Law rules in all its regions.

The World of Causes does not know chance, nor disorder, nor doubt. Nothing exists there that is created by man, but man himself has there his own causative reason.” (Enzio Savoini, Man on the planet and in the heavens1998)

The “World of Ideas” — or Plato’s Ideasor even the “World of Causesor the “Fiery World” — is in a higher dimension than the manifestation in which we live. We’re using here the expression “a higher dimension” in order to try to express a constitutive state of the universe that mankind is not yet able to conceive, at least at its current evolutionary level. For orientation purposes — according to our present level of understanding — we also call these dimensions “the Planes of Cosmic Vibration”; names that will change as man evolves.

In reality, even quantum physics today deals with the same concepts, albeit with different names and/or nuances; This is irrelevant, because what matters is the awareness of that higher reality, the evolutionary process that we commonly call “expansion of consciousness”.

Today’s science is developing theories that are gradually approaching the Ancient Wisdom. In ancient times even those who wrote down and collected the Teachings that have come down to us tried to explain them with allegories and cryptic sentences, because the subject went beyond the cognitive capacity of the human being; but, little by little, this capacity is gradually increasing.

In order to explain this, let’s take a look at the simple model of the atom that Niels Bohr developed in the first half of the twentieth century.

At the time it was reported that electrons rotated in fixed circles (levels) around the nucleus and that they possessed a certain amount of energy there, and could pass from a higher to a lower level (emitting a photon, and so having a lower energy ), or in the opposite direction, at a higher level, when it received energy from the outside; a phenomenon known as “quantum leap”.

Today, quantum physics has made progress in understanding nature, and says that electrons rotate within a “certain circular band”, without fixed, undetermined limits, around the nucleus, and that — and this is the most fascinating thing — particles are not found in “This manifestation”, ie they do not have a definite existence in this dimension and are subject, in quantum mechanics, to the so-called “Heisenberg uncertainty relationship” or “uncertainty principle”. According to this new concept, these quantities (particles) are in a potential state — that is, for us in the Fiery World — and collapse into manifestation only when a “consciousness” pays attention to them”; in that moment they adopt a form, They assume a definite size, measurable for science. One of the this phenomenon occurs is when these quantities are measured with scientific instruments. The instrument that intervened in the measurement though was designed and built by man; As a consequence, in this circumstance of measuring, “a consciousness” is ultimately turning to and considering the particle, and that’s why it collapsed into a manifestation.

Let us specify that this is true not only for the electron, but for all elementary particles, and also for the photon (the Light), regardless of the behavior that the Light adopts when it manifests itself: undulatory or corpuscular.

Another relatively recent phenomenon that quantum physics has observed and studied is the so-called “quantum Entanglement”, or “quantum Correlation”. Description: Two elementary particles are “intertwined” (we will not go into details about how they do this); then they are separated; one of them remains on Earth and the other is placed at any distance, even infinite. When you act on the particle that is on Earth, the “infinity” one immediately feels the action that the terrestrial particle has undergone. According to the knowledge of quantum physics, this means that there has been an exchange of information between the two particles and that this information has traveled at a greater speed than the speed of light. Yet this is incompatible with Einstein’s Theory of Relativity. Incidentally, when he was alive, Einstein never accepted this phenomenon, because he considered it impossible. Despite this, scientists today accept this fact as real and indisputable, even if they do not yet know how to explain it.

In light of the knowledge of the ancient Teachings, and also of the present ones, it can be said that all elementary particles (including photons of Light) are found in that place we call “Fiery World”, “World of Causes” — terms that we use because we don’t know which others to use. And this place is governed by rules that we can well define “mathematical, geometric”, to use the terminology of science. Man is already using these tools to study creation, even if his knowledge in these areas is not yet complete or perfect.

We can well say that Mathematics, Geometry, the “Universal Constants” of Physics, all this belongs to the field of how “God works”, and of His Nature.

Considering what’s been said above, the following formula becomes evident:

We must emphasize that in this “World of Ideas”, the Ideas themselves do not exist as we know them or have the concept of them, because by saying “an idea”, this is already defined, and being defined it is already in manifestation. This “Fiery World, or of Ideas” is in a latent state, like a protoplasm, like a raw substance without form and without material existence; It is in a potential state, and it is always ready to rush into a manifestation, in this dimension of ours. And the only thing necessary for this to happen is for a “consciousness” to pay attention to that raw substance!

When we use the syntagms “divine thought”, “divine Design”, “Fiery World”we are anthropomorphising a reality that is well beyond our cognitive abilities, regardless of whether it is understood by so-called “direct” or indirect means. However, we have no choice but to anthropomorphise them, but with great caution, with the risk of distorting them.

In support of what has been said, we quote the following texts:

“Manifestation of the Logoic Aspects. This is achieved through the close consideration of the laws of being, and of the method pursued by the Logos in giving His conception form, Thus working out His purpose, or will, through that form. In the three planes of man’s endeavor we have reflected the three aspects of the Logos as they produce manifestation (…).” (Alice A. Bailey — A Treatise on Cosmic Fire, p. 620-621)

7.5 Work: The Work is the masterpiece of Creation

“The WORK has a structure, and within it there are laws, rules and regulations. It is a large complex of exact and measured relationships, on several levels, which interact with other WORKS. (…)

Therefore it can be said that the WORK, the WORKER and the WORKING PROCESS are one and the same life.(Enzio Savoini, Diary 1989. About the Workunpublished paper) 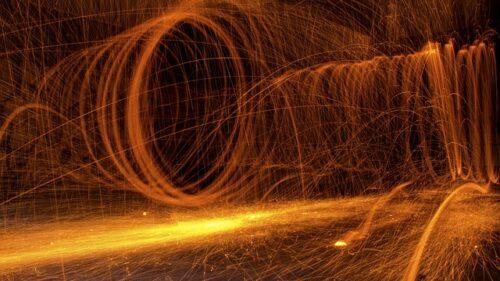 In summary: Manifestation occurs when a consciousness focuses on the virtual entities which are still in their potential state in the “Fiery World”, and which are ready to manifest. Man is therefore co-creator of the universe.

This article is published on the occasion of the conjunction of Venus (5th Ray) and Uranus (7th Ray).

Other related documents are: